Marine Debris: Microplastics – from facial scrub to the Great Lakes

Microplastics are in the Great Lakes – where do they come from and are they a problem?

In the Great Lakes, marine debris affects the beauty of our environment, is a health and safety hazard, threatens our wildlife and natural resources, and comes at a significant economic cost. From a beach covered in trash to an animal entangled in fishing line, marine debris is a problem we can’t ignore. This article focuses on microplastics, a little—and little known—type of marine debris.

Microplastics are tiny bits of plastic that often originate from beach litter, or even consumer face scrubs, that are beginning to concern scientists. In the summer of 2012, Great Lakes research scientists sampling Lakes Erie, Huron and Superior were surprised to find tiny plastic particles suspended in the water. Although they knew about microplastics, what surprised them was the small size of the plastic 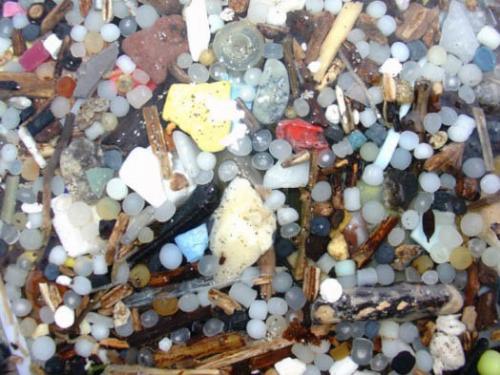 particles – less than one millimeter in diameter. In the Great Lakes samples, approximately 85% of the plastic debris found was microplastics.

Often, large pieces of plastic are gradually broken down into smaller and smaller fragments by weathering and abrasion until they become microplastics.  Other sources of microplastics include industrial pre-production plastic pellets and polyethylene bead exfoliants from personal care products. While the percentage of microplastics found in the Great Lakes samples was greater than that typical of ocean samples, scientists are concerned that results from ocean studies on microplastics apply to the Great Lakes. 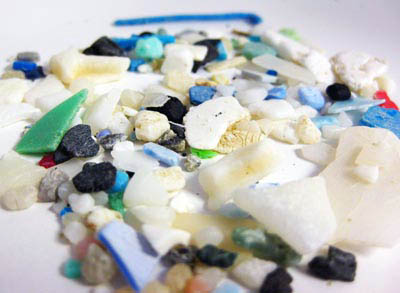 Microplastics are a common finding among ocean researchers, and are troublesome because they can act as a sponge for pollutants, such as polychlorinated biphenyls (PCBs). They can also directly harm aquatic organisms, as when fish mistake these particles for food. So are Great Lakes fish eating plastic? The Ohio Department of Natural Resources fisheries researchers have found plastic in yellow perch during their ongoing diet analysis studies.

Both the National Oceanic and Atmospheric Administration and the Environmental Protection Agency have marine debris programs through which you can learn more about the types of marine debris, and how you can be part of the solution. Michigan State University Extension has been addressing the marine debris issue through a number of Sea Grant Extension efforts, including the Great Lakes Education Program, which features a Marine Debris competition for students.

For now, there are a few things you can do to mitigate potential problems. If you use skin lotions and soaps, check the ingredients and choose products that do not include polyethylene beads. Some companies use natural skin exfoliants such as crushed seeds from apricots and cocoa beans. Other companies are responding to the recent concern over their use of microplastics and are pulling merchandise from the shelf. And be sure to recycle all plastics, especially when at the beach. This will reduce the amount of litter that can break down into microplastics in the Great Lakes.