This is the third story in a series on Great Lakes maritime history.

Operating under the auspices of the Great Lakes Historical Society, the National Museum of the Great Lakes is located on the Maumee River in Toledo, Ohio, and contains hundreds of artifacts and interactive displays that share the story of the Great Lakes with visitors. The museum also serves as a center for Great Lakes research, with an archive collection dating back over 300 years and an outstanding reputation within the community of maritime scholars.

Most notable among the museum’s artifacts is the museum ship Col. James M. Schoonmaker, the largest ship on the Great Lakes when it was launched in 1911. Constructed at the Great Lakes Engineering Works in Ecorse, Mich., the Schoonmaker set records for coal, iron-ore, and grain cargos in its first year of service on the lakes.

Visitors to the ship will be immediately impressed as they enter the Schoonmaker’s massive cargo hold and realize how small they are compared to the ship as they stand in a space built to hold 15,000 tons of iron ore. The Schoonmaker served the Shenango Furnace, Interlake, and Cleveland Cliffs companies for almost seven decades and averaged 40 trips per year.

The Schoonmaker tour then takes you through the galley, engine room and crew’s quarters at the stern of the ship. Always a point of interest is the room with two bunks and four clothing lockers. In those days, sailors worked twelve hour shifts, so when two sailors were working on watch, two were off. Bunks were shared but lockers were not. Today’s sailors don’t know how good they have it on modern ships where they often have their own rooms to themselves!

As the flagship of the fleet, the Schoonmaker was constructed with passenger suites directly below the pilot house in the bow with a lounge and dining room. The company owners spared no expense in creating an opulent living space for their guests, using only the finest wood for décor, and the passenger suites have been restored to their original splendor. Quite a contrast to the crew quarters. 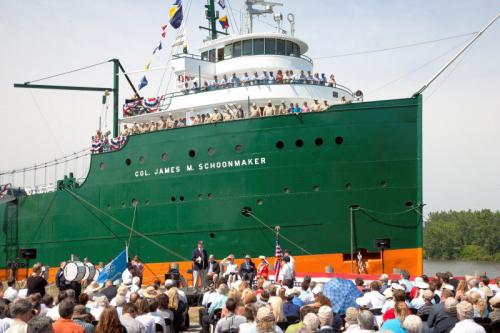 The pilot house is also uniquely designed with two ship’s wheels – one as a backup in case a steering cable broke while the ship was underway. There was good reason the Schoonmaker was known as “Queen of the Lakes” in her early years. Tours of the Schoonmaker will resume next spring.

The National Museum itself, located in an adjacent building, features a wonderful collection of artifacts and has seasonal displays on a wide variety of sailing and shipping-related subjects. Scheduled for early 2017 is a new exhibit on ballast and technology.

In addition to the National Museum of the Great Lakes, the Great Lakes Historical Society operates the Peachman Lake Erie Shipwreck Research Center which locates and investigates shipwrecks throughout the Great Lakes and hosts an annual Nautical Archaeology workshop open to all. The Society also supports the Clarence S. Metcalf Great Lakes Maritime Research Library, which houses more than 100,000 photographs and ship plans for more than 1,000 vessels, and has published the award winning journal Inland Seas since 1945.

After you have visited the National Museum of the Great Lakes, you can learn more about shipwrecks and our other maritime heritage resources by coming aboard for some of the Summer Discovery Cruises offered on both Lake St. Clair and Lake Erie each year. Sponsored by Michigan State University Extension, Michigan Sea Grant, and the Huron-Clinton Metroparks, Summer Discovery Cruises are a fun way to learn about our many historical, cultural, and natural Great Lakes resources.