Through partnerships with Dodson and the NWS, Michigan Sea Grant Extension has been able to educate thousands of Michigan residents on dangerous currents in the Great Lakes. 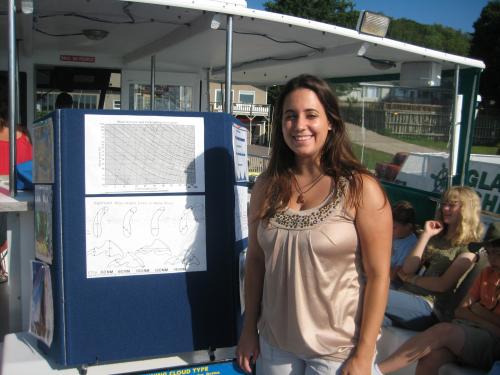 Lakes dangerous currents that now save countless lives every year. Megan Dodson of the National Weather Service was recently recognized for her exemplary partnership with Michigan Sea Grant and thus was awarded their Van Snider Partnership Award for 2014. The Michigan Sea Grant team has come to rely on Megan’s expertise and appreciate her enthusiasm for her work.

The City of Marquette, along its convoluted waterfront, has numerous beaches that pose different types of hazards. Several years ago, when two swimmers lost their lives at Middle Bay Beach at Presque Isle Park due to rip currents, and two other swimmers during that same summer lost their lives at Picnic Rocks due to channel currents, with Megan’s efforts the National Weather Service partnered with Michigan Sea Grant and Michigan State University Extension to begin the Marquette Water Safety and Recreation Expo. This event was sponsored by the National Weather Service, Michigan State University Extension, Michigan Sea Grant, the City of Marquette, Northern Michigan University, and the YMCA of Marquette County. At the event, beachgoers learned about dangerous currents that exist at Marquette’s beaches, and measures they can take to prevent accidents.

Currently, Megan is a partner with Michigan Sea Grant on two dangerous currents projects supported by the Michigan Coastal Zone Management Program. In 2013, she presented at three full-day educational workshops to train park personnel about dangerous currents. Additionally, Megan has partnered with Michigan Sea Grant to develop a searchable Great Lakes Current Incident Database. From these efforts, it was determined that structural currents are a significant factor in fatalities in Michigan and the region. This has been a game changer for outreach efforts.

Stormwater overflows don’t only occur during the summer

Au Gres develops a new vision for a premier waterfront