Meteorological responses to the Aug. 21 eclipse

Effects of the recent eclipse were more than visual. Here’s what MSU’s Enviroweather measured.

Thanks to a rare lunar orbital path directly between the earth and the sun during the daylight hours, Michigan was treated to a partial solar eclipse during the afternoon hours on Aug. 21, 2017 (Photo 1). Meteorological conditions across much of Michigan were not optimal for the eclipse, with a high cirriform-based cloud overcast and some scattered, low-level cumulus clouds that occasionally reduced visibility. Still, the event resulted in an extended period of unusual dimmed sunlight due to the relatively high ratio of diffuse to direct light during the moon’s passage, as well as some unique crescent-shaped shadows under trees and other areas with partially filtered shade.

The eclipse also led to a number of environmental impacts, some of which are illustrated in Photo 2 with plots of data taken from the new Michigan State University Enviroweather 20m instrumented tower near Sparta, Michigan. At the Sparta location, the eclipse began just before 1 p.m. EDT and ended at approximately 3:45 p.m. EDT. At the peak of the eclipse at 2:22 p.m., the amount of total solar obscuration was just above 80 percent.

Not surprisingly, the most pronounced meteorological impact was a large drop in the level of solar radiation coincident with the shadowing. This can readily be seen in the top panel of Photo 2, with solar radiation falling from just under 700 W/m2 just before 1:00 p.m. to about 100 w/m2 by 2:30 p.m. and then returning to about 550 W/m2 by 4:00 p.m. The smaller fluctuations of solar and net radiation both before and after the eclipse are due to the temporary passage of clouds. Note that the eclipse included the day’s astronomical solar noon, the time of peak solar radiation at the top of the atmosphere (at 1:45 p.m. that afternoon). 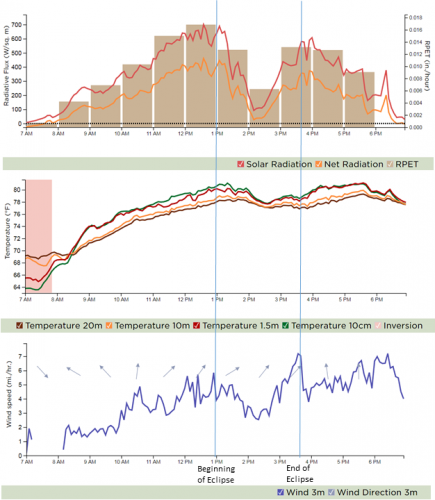 The plot of net radiation (the net difference between inbound and outbound radiant energy on a horizontal surface) exhibits a very similar pattern. If you consider an idealized daily solar cycle, the daily reduction of solar radiation at this site due to the eclipse was about 3 megajoules/m2, which equates into about a 0.01-0.02-inch reduction of potential evapotranspiration.

Given the drop in solar radiation, there were some associated changes that follow directly from boundary layer meteorology and the dominant role that the solar cycle plays in the daily development, growth and decay of the earth’s planetary boundary layer. The first is air temperature, which can be seen to decrease about 1-3 degrees Fahrenheit by 2:45 p.m. depending on sensor height (Photo 2 middle panel) before recovering again to the pre-eclipse levels by approximately 4:15 p.m.

The 0.1m (4-inch) temperature (in green on the graph) falls the most as it is the closest to the ground surface, which is warming or cooling due to the changes in solar radiation. Given the timing of the eclipse, it is probably safe to assume that the maximum temperature for the day was a couple of degrees Fahrenheit lower than it would have been had it not occurred.

One other noticeable change was a drop in wind speed from about 5 mph at the beginning of the eclipse to 3 mph at the peak. The physical link with the eclipse here is a bit more complicated, and related to the major role a warming or cooling ground surface plays in vertical air movement above the surface. In this case, as the solar radiation load on the surface decreased, the heating of the ground surface decreased, which led to relatively less upwards vertical motion, less overall mixing of air flow in the boundary layer and a lower horizontal wind speed.

If you are regretting your decision to not travel to see the total eclipse conditions—and we would probably count ourselves among this group—take heart. The next total solar eclipse is only seven years away, with areas of totality as close as extreme southeastern Lower Michigan, on April 8, 2024.

Real-time meteorological data in the “meteogram” format displayed in Photo 2 is available for all 86 Enviro-weather station sites at MSU Enviroweather. 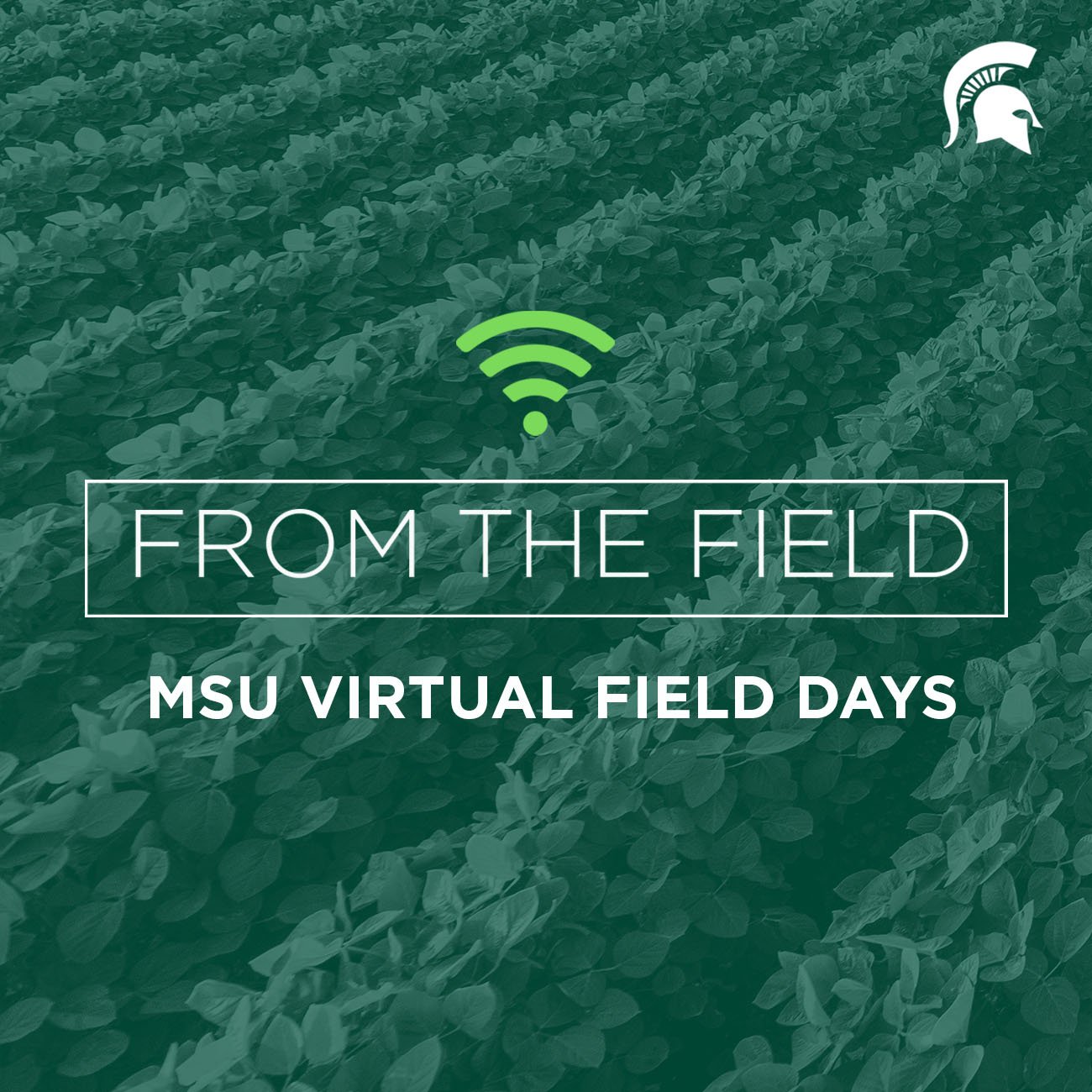