Mice and vole populations are building in many orchards

Some feeding damage by mice and voles is starting to be seen in fruit orchards. 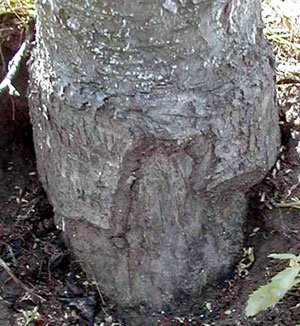 In the last two weeks (as of Feb. 14, 2014), I have been on several apple orchards in East Michigan where there is evidence of very high populations of mice or voles. With the extended snow cover in most orchards this winter, mice populations have quickly built to high numbers. Mice have been actively foraging for food supplies. Once populations build to high numbers they quickly run out of stored food supplies and begin to seek other food sources. While the bark of apples is not their first choice of food, they will feed on it when no other choices are available. In a few orchards I am starting to see where they are feeding on trunks of apple trees.

Young high density apple blocks have been particularly hard-hit as the trees are more numerous and the bark generally younger, tenderer and easier for feeding to occur. In extreme winters, mice have also been known to feed on peach trees.

The snow cover creates a sheltered environment for mice and voles allowing them to stay fairly active during winter months and move undetected by predators. As growers are out in orchards, they need to pay attention to tiny tracks in the snow. Follow the tracks a little bit further and you will likely see that the tracks disappear into a small hole in the snow. The small hole is an entrance to ground-level where mice make their cozy winter homes and feed. As growers move about the orchard and disrupt the upper layers of snow that typically form a crust, they should be looking for the mice tunnels at ground-level. 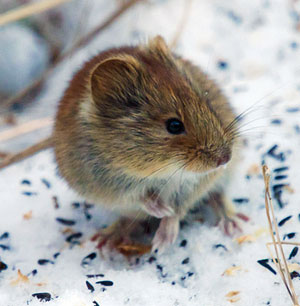 There are three species of mice or voles that are common in the Great Lakes states. These species include pine voles, meadow voles and prairie voles. The feeding habits and identifying characteristics of each of these species vary, however the net effect of high populations is the same, potential feeding damage to tree trunks.

The most effective way, and recommended by Michigan State University Extension, of determining mice populations at this time of year is to place apple slices close to tree trunks or at the site of the active run. Depending on the size of the orchard, place an apple slice about every four to five trees in two or three locations in an apple or peach block. Growers should pay particularly close attention to placing apples close to trees growing near fence rows and woodlots where mice populations are generally higher. Apples should be checked after 24 hours for teeth marks or gnawing of the fruit. Generally, the percentage of apples with teeth marks will give an approximate percent of trees that could be damaged if mice populations are not controlled.

Control options during the midwinter are limited to the use of chemical baits. There are two types of baits: those that are acute (Zinc phosphide) and anticoagulants (Chlorophacinone and Diphacinone). Generally, the acute baits have shown to be more effective at this time of year.

Baits that are more weather-resistant will provide better control. A second application may be needed about three to four weeks after the first if populations continue to build. Be cautious not too apply the second application too quickly as a first application may not have had time to reduce the population. With our deep snow cover in many orchards, it may be necessary to do this bait by walking the orchard with a bucket. Be sure to read the bait label for bait placement and other restrictions.

Bait stations are also another effective method of controlling mice. Generally, growers use PVC pipes to help cover the bait and make it attractive over a longer period of time. Bait stations can be made from 2- to 3-inch PVC pipes constructed in an L-shape or an upside-down T-shape. The horizontal pipe should be at least 12 inches long.