Sometimes when a positive outcome is achieved, unexpected consequences can occur that were originally unforeseeable. One example is the Clean Air Act of 1970 and the Clean Air Act Amendments of 1990 that restricted sulfur dioxide emissions into the atmosphere from coal-fired facilities. Our air has significantly reduced sulfur emissions due to the act, however, with less sulfur being deposited on the ground, the incidence of sulfur deficiency is becoming more commonplace. There is nearly one million acres of alfalfa production in Michigan. Since alfalfa is a heavy user of sulfur and will utilize 5-6 pounds per dry matter ton, high yielding stands can quickly deplete soil reserves. Sulfur is an important nutrient for alfalfa as a component of several amino acids and influences yield, protein content, stand density and stand life of alfalfa.

The question you might ask is, “So what”? What does this mean for Michigan alfalfa growers? Michigan State University recently published the 2015 Michigan Forage Variety Report. Over the last decade, this annual report has seen dry matter yields range from near 6.0 dry matter tons per acre in East Lansing, Michigan, to 3.5 dry matter tons per acre in Chatham, Michigan, in the Upper Peninsula. When comparing MSU forage alfalfa trials to USDA alfalfa production data, the MSU trials consistently yield nearly twice the USDA averages.

This raises the question, “Why is there such a difference between MSU trial average yields and the average yields of most alfalfa producers?” One area that plays a major role in alfalfa yield is soil fertility. It’s my belief that the reduction of sulfur from the air can be one of the contributing factors why farmer alfalfa yields may not be as high as MSU yields.

Producers should remember that tissue sampling of alfalfa is a good tool if you suspect sulfur deficiency, but it is not a substitute for soil sampling practices on their farm. Soil samples for alfalfa are a valuable tool that should be part of every grower’s fertility program. However, sulfur is one nutrient where a soil test is unreliable and inadequate to predict sulfur deficiency in alfalfa, so tissue samples are needed to accurately assess current nutrient deficiencies. To take an alfalfa tissue sample, second cutting or later should be used. The top 6 inches of the plant should be taken at the late bud or early flower stage from 35-40 plants representing the entire field, air dried in a cool location, placed in paper bags and sent to a lab for analysis. Alfalfa tissue less than 0.25 percent sulfur is considered deficient.

MSU Extension initiated an alfalfa tissue test survey during summer 2015 to evaluate the level of nutrients found in producers’ alfalfa fields. The survey did not have enough samples to be statistically analyzed, but does provide an opportunity to observe trends and have a good snapshot of nutrient availability. Every region of the state (Figure 1) was represented, with a total of 52 samples from second, third and fourth cutting submitted for evaluation. The survey results identified a trend for alfalfa sulfur deficiency especially in fields like those described above. 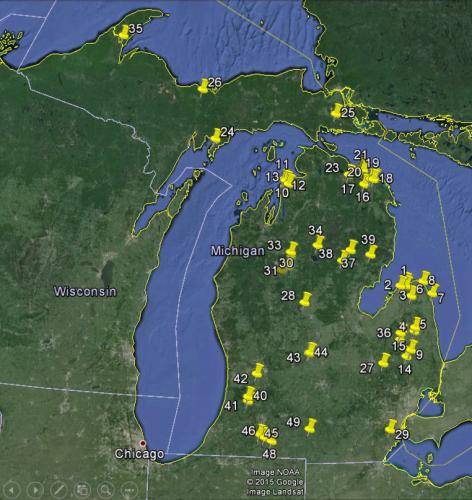 Figure 2 shows the results of the survey where 38 percent of all samples tested were deficient. The highest region was the Upper Peninsula and northern Michigan where soil textures are normally more sandy in nature. The southwest region had the next highest percentage of deficient fields sampled and when you consider this area has areas of sandy, coarse-textured soils, producers should closely monitor fields where leaching may be more prevalent. The area of the state with the lowest percent of deficient samples occurred in the Thumb. This area has a high number of acres that receive manure and also have more clay textured soils that are less prone to S deficiencies. 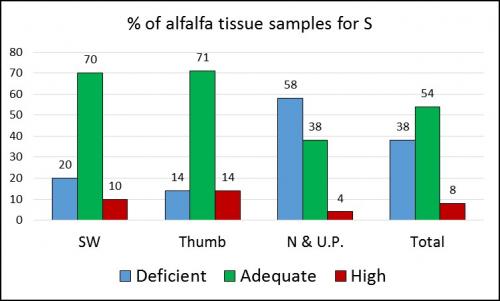 The survey trends, especially in Michigan’s southwest, Upper Peninsula and northern regions where more sandy soils are found, should be a source of concern for producers. If sulfur deficiency is suspected, tissue test confirmation followed by a good sulfur fertility program can solve the problem. Sulfate is the form of sulfur that is taken up by plants. Current recommendations are to add 25 pounds of sulfur per acre in a sulfate form to deficient fields. Elemental sulfur does not convert to sulfate quickly enough to be available for a sulfur-deficient crop. Annual applications of sulfur may be needed on fields with a history of sulfur deficiency.

If a field is found to have a sulfur deficiency, a treatment of a sulfate fertilizer can provide dramatic results quickly as shown in Photo 1. A sulfate application can provide an increase of up to 1 ton of dry matter per acre according to Carrie Laboski, University of Wisconsin-Madison soil fertility/nutrient management specialist. Her research has shown that the greater the deficiency, the greater the response will be to a sulfate fertilizer application.

The trend found in this survey shows the need for further research to be done in Michigan to help identify ways for more producers to achieve high yielding alfalfa production.

Forage Management & Supply in a Drought