Michigan awash with Phomopsis cankers on spruce trees and seedlings

Phomopsis cankers are causing shoot blight symptoms in nurseries and a general decline of spruce trees in the landscape. This unparalleled disease of spruce can be found on blue, white and Norway spruce throughout the Lower Peninsula.

We now know that a group of Phomopsis strains of unknown species are at the center of the current landscape spruce problems that we are now calling Phomopsis spruce decline. Normally,Phomopsis, a fungal pathogen, is only found on young trees in nurseries and on tree farms including Christmas tree farms. For some unknown reason, this pathogenic fungus has moved out of the nurseries and tree farms and is now causing mature tree defoliation, branch death and, in some rare cases, tree death.

Phomopsis appears to cause these symptoms by establishing cankers (bark infections) on older branches, usually on the lower half of the tree. The cankers can be found somewhere on the large branches near the dying small branches extending from the branch. We have also found trees with severe defoliation throughout the trees, but without too much branch death (terminal buds are still alive). This would look very similar to a true needle cast disease. It should be remembered that on spruce there are other cankers caused by other pathogenic fungi, such as Cytospora and Diplodia, but the predominant canker-causing pathogen currently appears to be Phomopsis. It may appear as a needle cast problem, but it is a canker disease and finding the canker without skinning all of the thin bark from the branch is difficult.

There is not much outward appearance to the canker infection. That is, there is little in the way of a sunken canker that can be observed without removing the bark. What we believe is occurring is a fungal infection that expands around the branch, girdling the current year’s sap-conducting vessels or phloem. As the fungus grows deeper into the resinous branch, the branch begins losing connections with the main stem and the needles begin to drop from the older portions of the branch outward. It is similar to cutting a branch off a tree and putting it in a vase of water. It will stay fresh for a while, but sooner or later, the nutrients and water resources are lost and the branch begins to senesce and finally dies. This is why we are seeing so many spruce trees dropping needles, which is followed by branch death. The progression of the symptoms will depend on how much of the branch is girdled by the canker caused by the Phomopsis infection and how long the infection has been in present on the tree.

Be on the lookout for young nursery stock with symptoms of Phomopsis shoot blight (see Photos 1-6). Our laboratory at Michigan State University ordered some Colorado blue spruce for studies and we received 2-1 stock and many of the trees came down with Phomopsis infections even before we started the experiments. Presenting itself in a slightly different manner, Phomopsis shoot blight causes wilting and eventual death of breaking buds in nurseries and tree farms. In comparison, Phomopsis spruce decline is found on older trees and the last portion of the branch to die is the terminal bud. Is the Phomopsis species causing shoot blight the same as that causing spruce decline? In the limited number of tests we have made, the answer is yes. It appears to be the same species of pathogen.

It appears we are in a cloud of Phomopsis spores, the likes of which we have never seen before. Nurseries that suspect they have Phomopsis shoot blight should manage this disease with materials that contain thiophanate methyl such as Clearys 3336. We hope to try this material on mature trees this year. 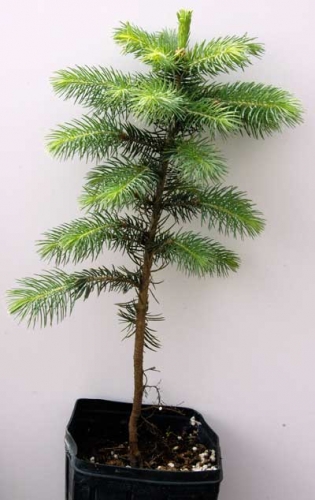 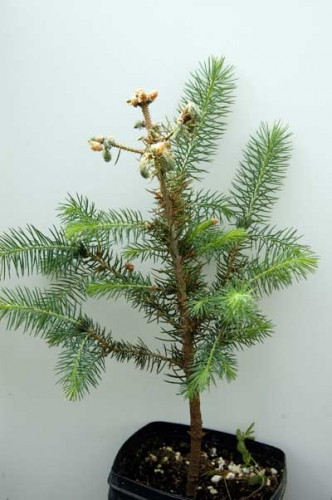 Photo 2. Seedling with dead terminal buds due
to a Phomopsis canker on the main stem below
the dying buds. 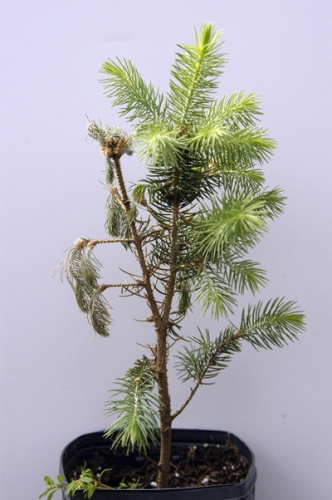 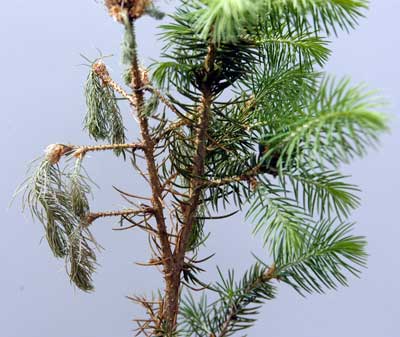 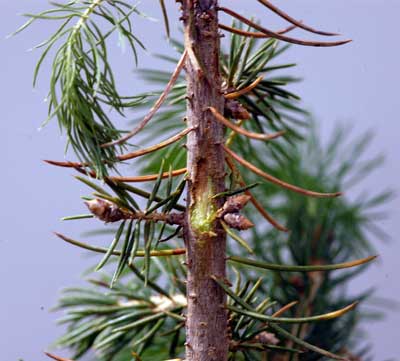 Photo 5. Pulling bark away on the young main stem reveals
the lower portion of the Phomopsis canker which results in
the shoot blight. 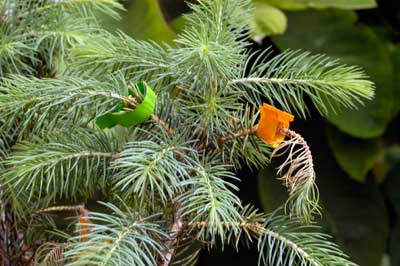 Photo 6. Young breaking bud where the Phomopsis fungal
pathogen has been applied by pathologists. Symptoms
developed in less than a week. This helps prove that the
Phomopsis we have been isolating causes disease. The
orange band is where the Phomopsis pathogen was applied
to the tree (obtained disease) and the green band is an area
where it was not applied to the tree (control, no disease).

Dr. Fulbright’s work is funded in part by MSU’s AgBioResearch.