Fruit and vegetable growers across the southern Lower Peninsula should be scouting and preparing to actively manage for brown marmorated stink bugs this season.

Traps (see photos below) baited with a commercial lure are set up near apple, stone fruits (peach, plum, sweet and tart cherry), blueberry, grape, strawberry, a variety of vegetable crops and at several urban locations considered to be hotspots. Traps are up in all of the major specialty crop producing regions in Michigan (see table below).

While adult brown marmorated stink bugs have been captured in traps since May, nymphs have started being caught at a few sites within the last few weeks. Both nymphs and adults can injure crops when they feed on fruit, pods, nuts, or seeds.

Brown marmorated stink bug adults emerge from overwintering sites (e.g., woodlots, manmade structures) in response to a day length of 13.5 hours, which is late April in Michigan. Egglaying begins after 135 growing degree-days (GDD equals base 57.2 degrees Fahrenheit) have accumulated, around the end of May. Females lay clusters of up to 28 greenish-white eggs on the undersides of leaves of preferred host plants, and between 10-20 egg clusters in their lifetime.

Feeding and development continue through five nymphal stages before molting into the adult stage in late July or early August. High densities of brown marmorated stink bugs and the potential for damage become more likely at this time. The summer generation continues to feed before moving to overwintering sites beginning in early September through November. The adult produces an attractant, called an aggregation pheromone, which attracts other adults to the same location. This is why clusters of adults can be found gathering on buildings. One generation is thought to occur in Michigan.

Trapping for nymphs and adults

While brown marmorated stink bugs are fairly easy to identify and distinguish from native stink bugs, they can be highly cryptic because they prefer the tops of trees and their coloring exactly matches tree trunks. Traps are easy to deploy and check, but the area of influence for a single baited trap appears to be relatively small, and not terribly efficient. Therefore, it is best to place traps so brown marmorated stink bugs are intercepted as they move between habitats.

Several different kinds of traps are available (see photos below). Most tend to have a pyramid shape with fins that need to either touch the ground or be attached to a tree trunk or post in such a way so nymphs and adults can walk up into them. There is also a new, clear, sticky panel trap that can be attached to a tall stake. All of these traps must be paired with lures. 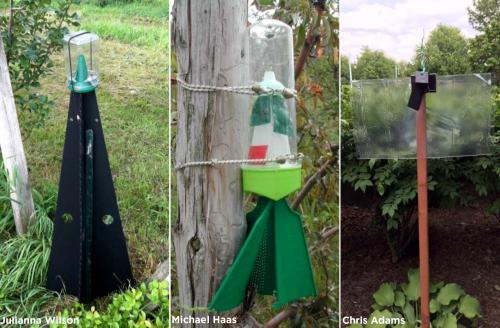 Lures are meant to be attractive to nymphs and adults. Several commercial lures are available, but all of them appear to have a relatively limited range of attraction. In other words, brown marmorated stink bugs need to be in the vicinity in order to pick up on the scent. Follow the manufacturer’s recommendation for how often to replace lures.

Making the most of brown marmorated stink bug traps

Traps are used to intercept brown marmorated stink bugs as they move among different host plant habitats and to guide decisions about when to apply insecticide. In orchards, use six traps per every 10 acres, with four traps placed around the perimeter and two traps placed in the interior where damage has been detected previously or is otherwise considered to be at high risk of damage. Check traps, at minimum, once per week.

Visually inspect field or orchard edges for crop injury or the insects themselves. In tree crops like apples and peaches, limb-jarring upper branches over a white sheet can help determine if brown marmorated stink bugs or other stink bugs are present.

The list of plants on which brown marmorated stink bugs will feed is long, including many wild, agricultural and ornamental plants (see table below). Preferred hosts are non-native ornamental trees and shrubs that bear seed pods or fruit, but they will also feed on and damage herbaceous fruiting plants. Brown marmorated stink bugs move in and out of different crops over the course of a season, therefore it is useful to know whether other high risk crops and ornamentals are near your vulnerable crop when considering where to focus monitoring efforts. Woodlands are thought to be important overwintering sites and as a non-crop food source.

1 Additional risk potential due to bark feeding.
2 Potential risk of taint/contamination.
3 Considered moderate to high risk.
4 Considered to be a particularly attractive and important host plant.
5 Considered to be a population source more than a crop damaged by brown marmorated stink bugs.

For more information about management strategies in fruit:

For more information about management in vegetable crops: