More than 60 brown marmorated stink bug traps were set up last week in all of the major Michigan fruit and vegetable producing counties with no captures so far.

This is the first weekly report of the Michigan State University Extension brown marmorated stink bug (BMSB) monitoring network. More than 60 traps were set up last week near crops that would be favored by this pest including apples, stone fruits (peaches, plums, sweet and tart cherries), blueberries, grapes, strawberries and a variety of vegetable crops. Several urban locations where BSMB were reported last year are also being monitored.

Based on what is currently known about the biology of BMSB and its favored non-crop habitats, sites have been selected that are adjacent to riparian habitats, woodland, soybean fields, major transportation corridors or various combinations of these attributes. Counties being monitored in 2015 are Allegan, Antrim, Benzie, Berrien, Clare, Grand Traverse, Ingham, Ionia, Kent, Lapeer, Leelanau, Lenawee, Livingston, Macomb, Monroe, Oakland, Oceana, Ottawa and Van Buren.

Most of the traps in the network are the pyramid style with a large, clear container on top baited with a green two-component lure. 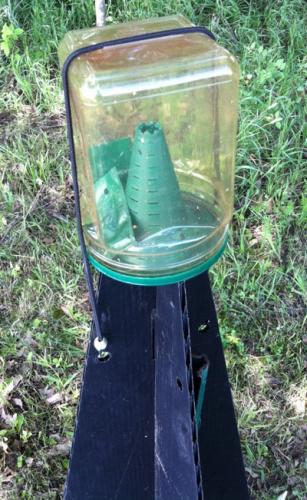 To learn more about how to monitor for the brown marmorated stink bug, distinguish it from other similar-looking stink bugs, what crops it favors, and management strategies should populations reach the threshold where management is necessary, visit MSU’s Brown Marmorated Stink Bug website.