A look at what season-long patterns in 2014 compared with 2013 tell us about spotted wing Drosophila in Michigan fruit crops.

Spotted wing Drosophila (SWD), Drosophila suzukii, is an invasive pest first detected in Michigan in late 2010. It is a small, vinegar fly that can lay eggs under the skin of intact thin-skinned fruit. SWD females will attack a variety of wild and cultivated fruit-bearing plants, including cultivated red raspberries, blackberries, strawberries, blueberries, cherries, wild brambles, honeysuckle and other wild, fruit-bearing shrubs and trees. Given a choice among cultivated fruit, SWD prefer red raspberry and strawberry over blueberry and cherry fruit, but all of these crops are susceptible during ripening and must be protected if fertile SWD females are detected in monitoring traps.

About the SWD monitoring network

To track statewide incidence of SWD in Michigan fruit production areas, a weekly SWD statewide monitoring network was set up from the beginning of June through the end of August. Traps were placed at the edge of susceptible crops or in hedgerows containing wild fruit-bearing shrubs and trees, and monitored by Michigan State University Extension educators, researchers and consultants. Catches throughout the state were reported weekly through MSU Extension Fruit & Nuts News. Our network of traps across more than 100 sites extended into the following counties: Berrien, Van Buren, Allegan, Kalamazoo, Kent, Ionia, Montcalm, Oceana, Muskegon, Antrim, Leelanau, Grand Traverse, Benzie, Ingham, Genesee, Livingston and Oakland.

In 2014, we tested a newly developed dry lure suspended over soapy water. The dry lure traps were substantially more user-friendly and in general they have trapped SWD at about the same time, though with lower catches in some cases. Full analysis of the 2014 data is ongoing and we will be presenting results at the upcoming winter Extension meetings.

Comparison of 2013 and 2014 trapping results, and relation to fruit harvest timing

Monitoring results indicated that while SWD average trap catches were lower in 2014 than in 2013, the beginning of the mid-summer increase in SWD adults occurred within the same week in each year – July 8 in the southwest and Aug. 5 in the northwest. This is despite the fact that growing degree days (GDD) accumulated at a slower rate in 2014 and that harvest began later for some susceptible crops.

These graphs show SWD trapping data (blue bars), accumulated GDDs (red lines), and the date when SWD trap catches began to increase (yellow stars) from four southwest (SW) counties and four northwest (NW) counties that were monitored for SWD as part of the weekly trapping network in 2013 and 2014. 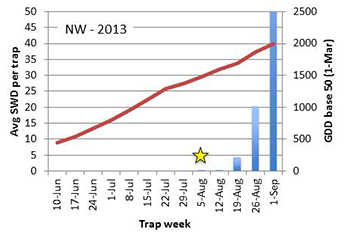 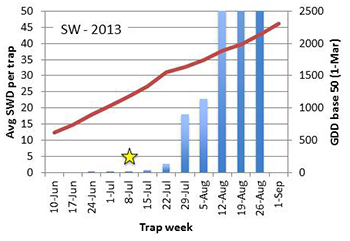 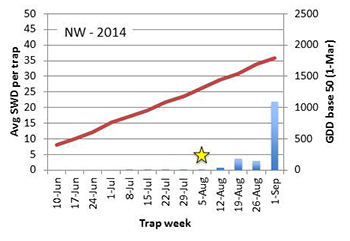 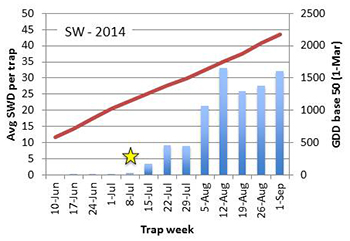 If there is interest in continuing this monitoring network and reporting for the 2015 season, we would like to hear from you this fall so plans can be made for next season. Contact Julianna Wilson at jkwilson@msu.edu or your local MSU Extension fruit educator.

The weekly SWD statewide monitoring report has been funded through Project GREEEN and Michigan State University Extension. This output is generated through a network of MSU Extension field staff and campus specialists. We would like to acknowledge the following team members and thank them for their weekly scouting efforts and input into this report: Keith Mason, Steve VanTimmeren, Larry Gut, Peter McGhee, Michael Haas, Bob Tritten, Mark Longstroth, Brad Baughman, Carlos Garcia, Karen Powers and Nikki Rothwell.

Dr. Isaacs’ work is funded in part by MSU’s AgBioResearch.