Spotted wing Drosophila catches are increasing in fields and orchards where harvest is completed and insecticide residues are minimal.

Adult spotted wing drosophila (SWD) catch continues as we move through the month of August, and we are catching an average of 23.6 flies per trap this week. Last week our trap average was 8.2 flies per trap. We take a weekly average from the 120 traps in the Michigan State University Extension SWD Monitoring Network over the past week where 52 percent of the traps were positive for SWD, up from 42 percent last week. As we have seen for all of the growing season, the southwest part of the state continues to catch the highest numbers of flies compared to other regions of Michigan. However, trap counts are increasing in other parts of the state. At the Northwest Michigan Horticultural Research Center, we had trap counts that ranged from 0 to 15 per trap, and the double digit counts were much higher than the one or two flies we have caught in previous weeks. Southeast Michigan is also seeing more SWD in the past few weeks, and this week’s catches ranged from 0 to 19 flies per trap. Traps in West Central Michigan are still catching relatively low numbers of SWD; most traps range from 0 to 2 flies per trap while one trap captured 7 flies this week.

We anticipate trap counts to increase in all crops where harvest is finished, particularly in blocks where no more insecticide sprays will be applied for the duration of the season. As in past seasons, the trend has been to see SWD catch increase toward the end of the year due to populations building throughout the growing season. Overall counts are highest in small fruits where no recent insecticide sprays have been applied, and blocks that still are receiving insecticides are catching similar numbers compared to previous weeks. 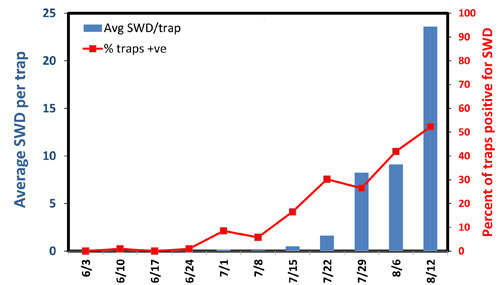 Fly counts in Ottawa County (mainly blueberry and raspberry) are also variable with some traps capturing 0 flies while others are catching 9 to 17 flies per trap. In Kent, Oceana and Mason counties, trap counts are catching 0 to 7 flies per trap and are the lowest catches in the state. In northwest Michigan, SWD have been captured in Leelanau, Antrim, Grand Traverse and Benzie counties, and numbers have increased in the past week. As mentioned above, more flies were captured at the NWMHRC Monday, Aug. 12, than in previous weeks, and we anticipate our trap counts to also increase in our 60-plus traps around northwest Michigan. Most of our traps were placed in cherry, and as a result, most of our SWD catches have been in tart and sweet cherries.

Harvest is winding down for many crops across the state, and as a result, growers can end their spray programs to protect ripening fruit. However, peach harvest is still ongoing, and although peaches are at lower risk of SWD infestation than small fruits, peach growers should be diligent about protecting fruit. Most of the cherry harvest is complete, but growers in the far north or Balaton growers need to be sure to keep fruit protected through the harvest period. Growers should make their decisions to spray based on the presence of SWD flies and ripening or ripe fruit that are susceptible, plus the history of pest management inputs to each field.