As harvest is winding down in many crops at high risk from spotted wing Drosophila, fly numbers are similar to last week’s total catch.

Captures of spotted wing Drosophila (SWD) in our Michigan State University Extension statewide monitoring trap network are consistent with last week’s catch. This week, the average number of SWD per trap is 45, which is precisely the average from last week, but the proportion of traps catching this pest increased from 72 to 87 percent. As many crops have finished for the season, this will be our last formal SWD report for the year. We will continue to trap SWD for research purposes at multiple sites across the state.

The southwest region of the state continues to catch more SWD than the other fruit growing regions in Michigan. The trap catch this week seems to be more site dependent than in past weeks, which is likely the result of sprayed versus unsprayed fields. In southwest Michigan, we continue to trap flies in grapes, caneberries and blueberries in similar numbers to last week. However, reports from Berrien County have shown tremendous increases in SWD catch across many crops. One trap was estimated to have over 2,600 flies in it. Other Berrien County traps caught 50-plus flies while other trap counts were up in the 1,000s.

We also continue to find eggs and larvae in our samples of raspberry fields. Although catches are not as consistent in the northwest, some traps are catching over 100 flies per trap. Overall trap catch in the north ranges from a few flies to mid-20s and 30s. West central traps were removed last week, and no counts are available for this report. Overall, farms that are still being harvested and managed for this pest have much lower counts and have not seen such large spikes in the fly captures as in unsprayed blocks or fields. 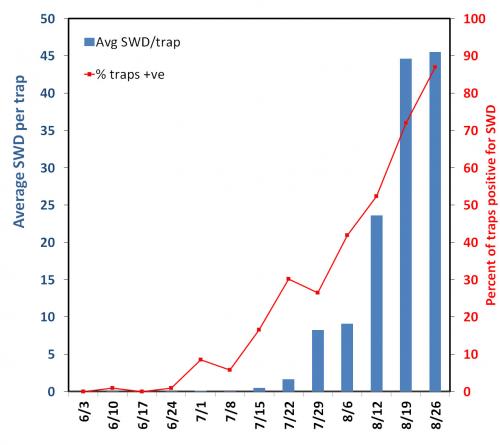 Sampling of fruit at some of the monitored sites that have not been managed this season continues to detect some drosophila larvae in the salt test samples, with unsprayed raspberry and blueberry samples containing large numbers of larvae. Commercial farms have either no infestation or low levels, and management programs are generally succeeding in keeping the fruit free of infestations. Growers will need to have tight spray intervals and make sure they are achieving excellent coverage to continue controlling SWD in the weeks to come.

For growers of later blueberry varieties, blackberries or fall red raspberries, it is essential that crop protection measures be taken if the fruit is still ripening and will be harvested later in August or September. Given the dense canopies, excellent coverage is essential for good control of SWD. For guidance on which treatments are effective, please refer to the management guides posted at the SWD website.

As this will be our last report for the season, we would like to thank the dedicated scouts, researchers and growers for their input into these important weekly reports. Spotted wing Drosophila will continue to be a challenge in many crops, but the MSU team is committed to continue to help Michigan growers with this pest into the future.