Spotted wing Drosophila numbers continue to rise across the monitoring network. Protect susceptible crops where they are detected.

This is the tenth weekly report of the Michigan State University Extension spotted wing Drosophila (SWD) statewide monitoring program for 2014. Our network of traps across more than 100 sites was checked during the week of Aug. 18 and shows that SWD activity is continuing to increase. There was a total of 1,598 male and 900 female SWD trapped, up from 1,327 and 658 the week before, from the following counties in our trapping network: Berrien, Van Buren, Allegan, Ottawa, Kalamazoo, Kent, Ionia, Montcalm, Oceana, Muskegon, Antrim, Leelanau, Grand Traverse, Benzie, Ingham, Genesee, Livingston and Oakland. 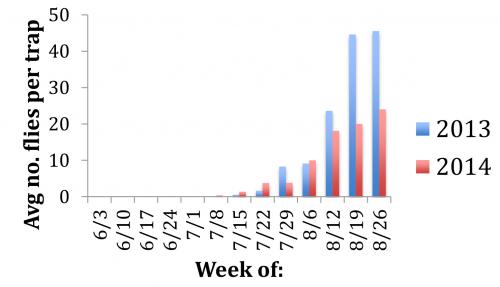 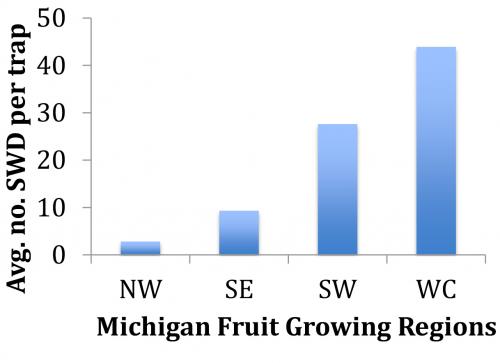 Of the traps that were checked this week, 84 percent of traps contained SWD, which is similar to last week. The average number of SWD per trap increased from 20 last week to 24 this week across the network. SWD averages per trap still remain low in traps placed in the four northwest counties, with only three flies caught per trap on average. If SWD has not been found in your monitoring traps, be on alert for this pest as susceptible fruit crops start or continue to ripen as the mid-late summer increase in population is underway in most of the state. Susceptible crops include most thin-skinned fruit, such as strawberries, raspberries, blueberries and cherries

We would like to stress that SWD can only infest fruit when they are ripening or ripe. What this means in a practical sense is that the focus of SWD monitoring and management efforts should be in susceptible fruit during the pre-harvest and harvest period only if SWD are detected. Tight application intervals are needed to maintain coverage sufficient to protect fruit from SWD. The duration of residual control will vary based on the insecticide, and there are some guides to the length of control you can expect based on recent research in blueberries. This is posted on page 8 of “SWD Management Recommendations for Michigan Blueberry.” We have also not found any benefit to treating plantings for SWD post-harvest, and so we recommend that growers save their time, money and pesticide efficacy for pre-harvest treatments next season.

When adult SWD are found, new generations are being produced every one to three weeks depending on weather conditions. In addition to the use of monitoring traps to detect the adult flies, a simple salt solution of 1 cup of salt per gallon of water can be used to assess fruit for larval infestation. Leave the fruit in the solution for a minimum of 15 minutes then check for small white larvae. For more information on SWD monitoring and management strategies, and to read past reports, visit MSU‘s Spotted Wing Drosophila website.