Spotted wing Drosophila continues to be captured throughout Michigan, and larvae have been detected in multiple crops, so protect susceptible fruit.

Adult spotted wing drosophila (SWD) catch remains relatively high over the past week across the Michigan fruit belt, and we are catching an average of 9.1 flies per trap. Last week our trap average was 8.2 flies per trap. The average is across all of the 120 traps in the Michigan State University Extension SWD Monitoring Network over the past week where 42 percent of the traps were positive for SWD, up from 26.4 percent last week. Again these summary numbers do not reflect the much higher levels of SWD activity observed in the southern part of the monitoring network, particularly in southwest Michigan. However, we are catching more SWD in northwest Michigan than in weeks past. We are also still observing more females than males in the traps, but male catch has also increased this week. The males are much more easily identifiable with the black spots on their wings, and since the females do not have the spots, we highly recommend that scouts and consultants to be trained to identify female SWD accurately. 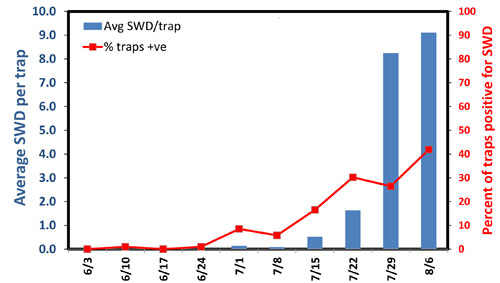 In Berrien County over the past week, most sites continue to trap high numbers of SWD. In general, the grape, blueberry, raspberry, and strawberry sites have had much higher counts than the peach and cherry orchards. Trap counts in Berrien County range from 1 fly per trap to 316 flies in one trap. Berrien County has reported the highest fly catch this week with just fewer than 1,000 flies on 17 traps--an average of 56 flies per trap.

In Van Buren County, catches range from 1 SWD at a number of tart cherry orchards to 125 flies at a strawberry farm. Seven flies were captured at the woods edge in Kalamazoo County. In Allegan County, traps also ranged from sites with 1 SWD per trap to 9 SWD on a trap; trap counts are down from last week where some locations had 30 to 50 SWD per trap. A few potential factors that could help explain the decline in fly catch include aggressive spray programs in place at commercial farms as well as the wrap-up of raspberry harvest and the cooler weather. For unsprayed fields, we are finding more SWD on some of the interior traps, as opposed to the traps on the field border. Monitoring of fruit using the salt test method is revealing Drosophila larvae in some raspberry and blueberry samples.

Fly counts in Ottawa County (mainly blueberry and raspberry) were down this week with only 1 to 4 SWD per trap compared to higher numbers last week that peaked at 24 flies per trap. In northwest Michigan, SWD have been captured in Leelanau, Antrim, Grand Traverse and Benzie counties at relatively low numbers. Most catches in northwest Michigan have been reported in cherries with some catches in raspberries and blackberries. The new SWD capture in Grand Traverse County was caught in a winegrape vineyard. It is worth mentioning again that we detected Drosophila larvae in unprotected cherries last week; at least some of this infestation has been identified as SWD. Because cherry harvest continues across the north, we remind growers to have an active monitoring program and to be checking fruit quality as harvest progresses. Unprotected fruit is at risk of SWD infestation, and as mentioned above, adult catch does not always accurately predict larval infestation. We are currently testing materials with short PHIs at the NWMHRC this week to help growers manage this pest this close to harvest.

The continued catch of SWD and the frequency of captures in the past week indicate that growers with ripe and susceptible fruit should take precautions to prevent SWD infestation. With raspberry and blueberry harvest underway in southern Michigan, and with a week to two weeks of cherry harvest still to complete, growers need to be sure to keep this fruit protected through the harvest period. Growers should make their decisions to spray based on the presence of SWD flies and ripening or ripe fruit that are susceptible, plus the history of pest management inputs to each field. A monitoring program in these crops is recommended throughout the harvest season.