Spotted wing Drosophila numbers are up from last week and are now being detected statewide. Protect susceptible crops where SWD is detected.

This is the seventh weekly report of the Michigan State University Extension spotted wing Drosophila (SWD) statewide monitoring program for 2014. Our network of traps across more than 100 sites was checked during the week of July 29 and shows increased activity of this pest, particularly in southwest Michigan counties. There was a total of 663 male and 454 female SWD trapped from the following counties in our trapping network: Berrien, Van Buren, Allegan, Ottawa, Kalamazoo, Kent, Montcalm, Oceana, Leelanau, Benzie, Ingham, Macomb, Oakland, and new this week, Muskegon, Mecosta, Antrim, and Grand Traverse counties. No SWD were captured in Ionia, Genesee, Lapeer or Livingston county this week. 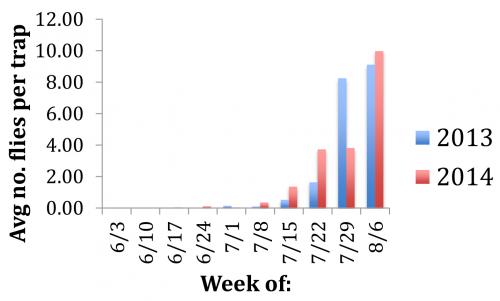 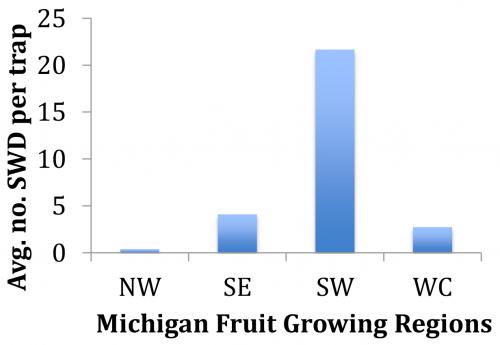 Of the traps that were checked, 53 percent of traps captured SWD this week, which is up from 40 percent last week. The average number of SWD per trap is also up from four last week to 10 this week across the network, with more than 21 SWD per trap on average in southwest Michigan. If SWD has not been trapped in your monitoring traps, be on alert for this pest as susceptible fruit crops start or continue to ripen as it seems that the mid-late summer increase in population is underway, at least in the southwest region.

Sampling of fruit over the past week in conventionally managed sites has yielded few larvae in either summer raspberries or blueberries. However, unsprayed sites are showing low to moderate fruit infestation depending on the site and fruit variety. This highlights the need for protection of ripe berries over the coming weeks as the SWD population continues to grow.

SWD can only infest berries when they are ripening or ripe, so the focus of SWD monitoring and management efforts should be in these susceptible fruit. In addition to the use of monitoring traps to detect the adult flies, a simple salt solution of 1 cup of salt per gallon of water can be used to assess fruit for larval infestation. Leave the fruit in the solution for a minimum of 15 minutes then check for small white larvae.

Dr. Isaacs' work is funded in part by MSU’s AgBioResearch.