Spotted wing Drosophila numbers are increasing in southwest Michigan; protect susceptible crops where they are detected.

This is the fourth weekly report of the Michigan State University Extension spotted wing Drosophila (SWD) statewide monitoring program for 2014. Our network of traps across more than 100 sites was checked during the week of July 8 and has revealed increased activity of this pest in southwest Michigan. There was a total of 75 males and 78 females trapped from the following Michigan counties: Berrien, near strawberries, blueberries, raspberries, tart cherries and peaches; Allegan, near blueberries, raspberries and tart cherries; Ottawa, near raspberries; Van Buren, near plums, tart cherries and grapes; Kent, near raspberries; Leelanau, near raspberries and tart cherries; and Antrim, near strawberries. Traps in our network are also set up, but did not catch any SWD this week, in Ionia, Mecosta, Ingham, Benzie, Grand Traverse, Livingston, Oakland, Macomb, Lapeer, Genesee, Montcalm, Muskegon and Oceana counties. 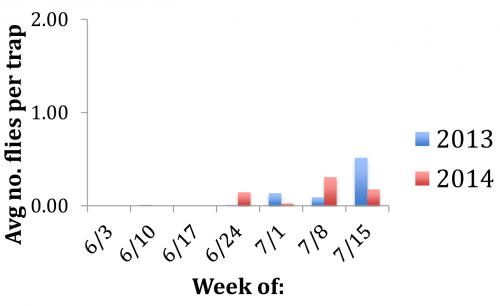 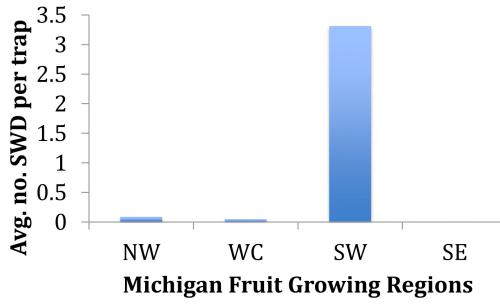 While a majority of traps in the network (82 percent) still caught no SWD, of the traps that did catch SWD, some caught as many as 22 flies per trap with an average of six flies per trap compared with about 1.5 flies on average over all the traps in the network. Many of the traps that caught higher numbers of flies are near woodlots where wild berry-producing shrubs such as honeysuckle are reported to have an abundant crop of berries due to good soil moisture this season. In other areas, SWD numbers are still generally low, but this highlights that growers should continue to be on alert for this pest as their susceptible fruit crops start or continue to ripen.

SWD can only infest berries when they are ripening or ripe, so currently the focus of SWD monitoring and management efforts should be in susceptible fruit that should be treated only if SWD are detected to minimize the risk of developing pesticide-resistant populations of SWD. In addition to the use of monitoring traps to detect the adult flies, a simple salt solution of 1 cup of salt per gallon of water can be used to assess fruit for larval infestation.