Although overall spotted wing Drosophila (SWD) numbers remain quite low throughout Michigan, we have seen an increase in trap catch in southwest Michigan. Most SWD caught this week were reported in farms producing small fruits: strawberries, raspberries, grapes and blueberries. We saw an increased catch in Berrien County in a tree line next to a cherry and raspberry farm where we trapped six females and two males. Also in Berrien County, we trapped two females in a wood edge in blueberries; one female in high-tunnel strawberries; two males and one female at a strawberry/grape operation; and two females at a vineyard edge.

In Van Buren County, we trapped one SWD in raspberries in high tunnels. We trapped 23 SWD at farms in Allegan County over the past week: three SWD in raspberries; one fly in Niagara grapes; and the remaining flies were trapped in or around blueberry fields. These numbers somewhat reflect the intensity of trapping in the different crops. However, we do have an extensive trapping system in tart and sweet cherries across the state.

As raspberry and blueberry harvest is underway throughout the state, Michigan State University Extension advises growers to be sure to keep this fruit protected through harvest. Growers should make their decisions to spray based on the presence of SWD flies and ripening or ripe fruit that are susceptible, plus the history of pest management inputs to each field. A monitoring program in these crops is recommended throughout the harvest season.

Cherries are another crop at high risk from SWD infestation. Tart cherry harvest in ongoing in southwest and west central Michigan and sweet cherry harvest has started in the north. From preliminary tests conducted at MSU, ripening and coloring sweet and tart cherry fruits are susceptible to SWD infestation. In the last two weeks, we have detected two SWD in tart cherry orchards—one fly in southwest and a second fly in west central Michigan. No SWD have been found in the 60-plus traps in northwest Michigan yet this season. 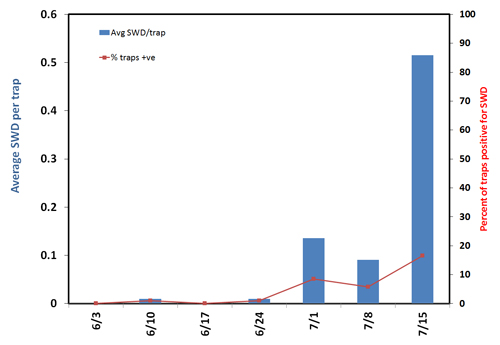