This is the sixth weekly report of the Michigan State University Extension spotted wing Drosophila (SWD) monitoring network. The summer increase of SWD continues across southern Michigan and is just beginning in northwest Michigan (see graph). Approximately 117 females and 100 males for a total of 215 were captured in 50 traps out of the more than 130 traps being monitored as part of the network. This is a 30 percent increase from the 167 total SWD that were captured last week. Ripening, thin-skinned fruit such as blueberries, raspberries and cherries are the most vulnerable to infestation. Additionally, berries produced by a number of wild fruiting trees and shrubs such as black raspberries, honeysuckle and mulberry can be infested. Growers and scouts should be on their guard with susceptible fruit crops that are beginning to ripen. 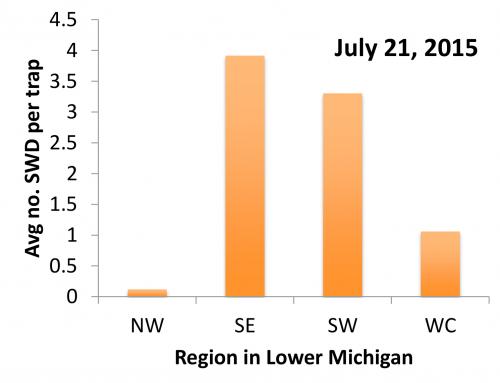 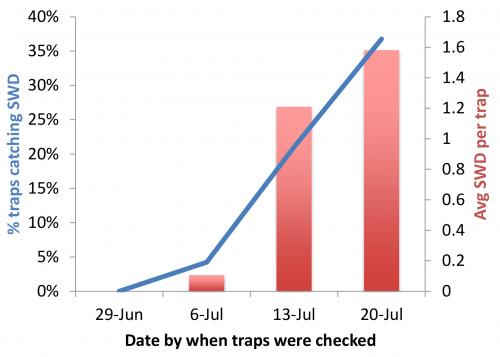 Average number of spotted wing Drosophila (SWD) captured per trap (red bars) and the percentage of traps that captured any SWD (blue line) across the entire trapping network by week starting in June 29, 2015.

Traps in the network are baited with Trece lures and placed near susceptible crops and wild hosts in each of the major fruit growing regions across the state. Commercial plantings include strawberries, blueberries, raspberries, grapes, tart and sweet cherries, peaches and plums. Wild hosts in the trapping network include autumn olives, black cherries, pin cherries, choke cherries, blackberries, honeysuckle, mulberries and wild grapes.

Additional trap networks in the state that are baited with other lures including a yeast-sugar mix are also trapping SWD flies, often in higher numbers than the Trece lures. This just reiterates the importance of protecting fruit that is in the ripening or ripe stage as the SWD population is clearly on the upswing.