Spotted wing Drosophila numbers are climbing in southwest Michigan, but still low in other areas. Protect susceptible crops where they are detected.

This is the fifth weekly report of the Michigan State University Extension spotted wing Drosophila (SWD) statewide monitoring program for 2014. Our network of traps across more than 100 sites was checked during the week of July 15 and shows a spike in the activity of this pest in southwest Michigan. There was a total of 142 male and 281 female SWD trapped from the following Michigan counties: Berrien, near blueberries, raspberries, tart cherries, peaches and grapes; Van Buren, near plums and tart cherries; Allegan, near blueberries, tart cherries and raspberries; Ottawa, near blueberries; Kalamazoo, near black raspberries; Kent, near raspberries; Leelanau, near tart cherries; and Benzie, near tart cherries. The proximity to a particular crop indicates the location of the trap, so interpret this long list of nearby crops to mean that SWD is active across the fruit-growing regions of the state.

One-third of the traps in the network caught SWD this week, with a significant jump in the number of flies per trap in the southwest region. The average number of SWD per trap this week was four across the entire network, but more than 11 SWD per trap on average in southwest Michigan. Similar to last week, many of the traps that caught higher numbers of SWD are near fencerows or woodlots containing buckthorn, honeysuckle or wild blackberry. Where SWD numbers are still low, growers should continue to be on alert for this pest as their susceptible fruit crops start or continue to ripen. 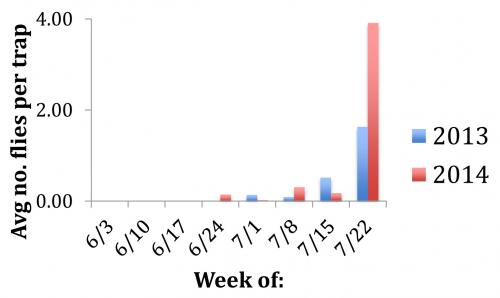 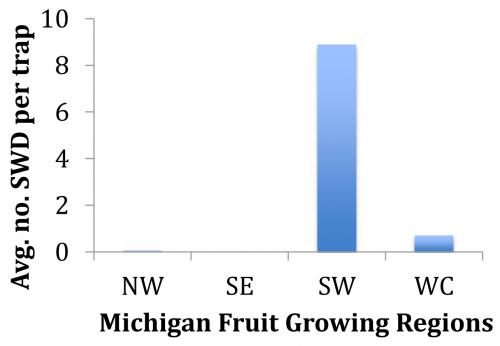 Now that we have some experience with different bait types that have been used in Michigan as part of this summer’s research, we can report the patterns we are seeing in the relative value of these baits for SWD detection. The yeast-and-sugar-baited traps and those baited with the Trece lure have both trapped SWD. There are some sites that have higher catches in the yeast-and-sugar-baited traps, but both are showing a similar proportion being positive for the pest. By the end of this season, we will know more about how the different baits have performed and will report that during winter Extension meetings.

Spotted wing Drosophila can only infest berries when they are ripening or ripe, so the focus of SWD monitoring and management efforts should be in susceptible fruit that should be treated only if SWD are detected to minimize the risk of developing pesticide-resistant populations of SWD. In addition to the use of monitoring traps to detect the adult flies, a simple salt solution of 1 cup of salt per gallon of water can be used to assess fruit for larval infestation.