Trap catches continue to climb in all fruit producing regions. The summer surge is three to four weeks earlier than previous seasons. Ripe and ripening fruit in susceptible crops must be protected.

The summer surge is here with the number of SWD flies caught in traps checked by MSU staff and private consultants continuing to rise across southern Michigan, the Fruit Ridge, west central and now in the northwest regions. This is three to four weeks earlier than previous seasons, which makes this season the hardest yet for growers coping with this pest. If you grow or consult for a grower of susceptible fruit in Michigan, the struggle is real.

As much as possible, harvest early and for crops like blueberry and raspberry that are harvested multiple times per season, harvest often so that few fruit are left behind between harvests. For growers of fall red raspberries, it is important to try to make a clean break between summer raspberries and fall raspberries by removing all of the fruit that could potentially harbor SWD larvae and then following up with insecticides rated excellent in terms of efficacy against this pest.

During the week ending in July 21, almost 90 percent of all the traps reporting caught SWD flies, of which 1,942 were female and 1,178 were male for a total of 3,120. The graphs below clearly show the increasing population pressure across the different regions.

Counties included in the 2017 trapping network are Allegan, Antrim, Benzie, Berrien, Grand Traverse, Ingham, Ionia, Kent, Leelanau, Lenawee, Livingston, Macomb, Manistee, Mason, Monroe, Montcalm, Oceana, Ottawa and Van Buren. All traps in the network are baited with commercially available lures and placed in susceptible crop fields or orchards, or in a location adjacent to susceptible crops. The majority of the traps this season are standard deli cup style traps baited with the commercial Scentry brand lure. Most of the traps are placed in areas where SWD infestation has been recorded in the past. 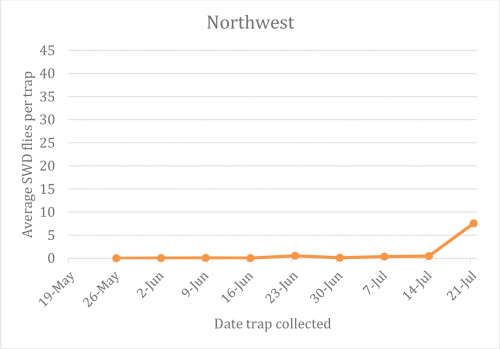 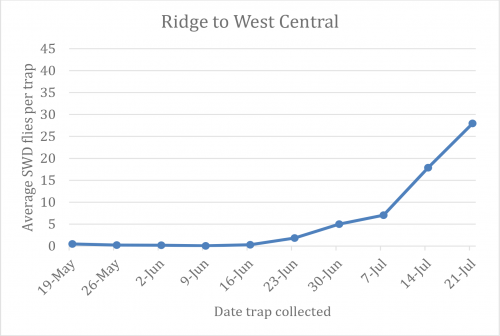 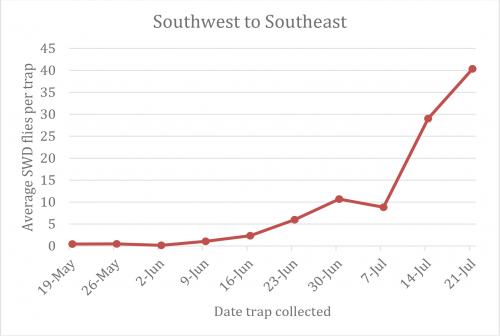