Sharp increase in spotted wing drosophila captures in the past week in southern Michigan counties, and first detection of infestation in unsprayed cherries.

Adult spotted wing Drosophila (SWD) catch has increased over the past week, from an average of 1.6 flies per trap to 8.2 flies per trap. These are the averages across all of the 120 traps in our Michigan State University Extension SWD Monitoring Network over the past week, where 26.4 percent of the traps were positive for SWD, down slightly from 30.2 percent last week.

However, these summary numbers do not reflect the much higher levels of SWD activity observed in the southern part of the monitoring network, particularly in southwest Michigan. This can be seen by the average catch in northwest Michigan traps being 0.2 SWD per trap compared with 13.5 SWD per trap in those traps located in the rest of the state, mainly southwest and west central Michigan. In these regions, we are also observing a switch in the number of male and female flies captured in the traps, with two to three times more females than males. In some traps this was even more extreme; for example, one trap caught one male and nine females. This highlights the need for scouts and consultants to be trained to identify female SWD accurately. Additionally, Drosophila larvae were detected in fruit from an unprotected cherry orchard in northwest Michigan this past week. See this week’s northwest regional report for more details.

In Van Buren County, catches range from zero SWD at a number of tart cherry orchards to 95 flies at a strawberry farm. Raspberry and plum monitoring sites also recorded over 10 flies in the traps at those locations. Southeast Michigan has also seen some low levels of SWD activity at the sites that we are monitoring, with one to two SWD per trap at sites in Macomb and Livingston counties.

In Allegan County, traps also ranged from sites with zero SWD captures (tart cherry and some blueberry sites) to some blueberry and raspberry locations with 30 to 50 per trap.

A sweet cherry site in Ottawa County had zero SWD flies, whereas blueberry, strawberry and raspberry sites all caught SWD and had two to 24 of those flies captured. In the west central region north of Ottawa County and in the northwest region of the Southern Peninsula, captures were markedly lower.

Only 23 percent of traps were positive for SWD in Leelanau, Antrim and Benzie counties, with 0.16 flies per trap on average. However, SWD was detected in traps in all three counties, and as mentioned above there, has been a single report from one farm of Drosophila larvae detected in unprotected fruit. While it is not yet clear whether this was SWD or some native species, the report highlights the need for growers to have an active monitoring program and to be checking fruit quality as harvest progresses.

The sharp increase in the abundance of SWD and the frequency of captures in the past week indicates that growers with ripe and susceptible fruit should take precautions to prevent SWD infestation. With the continuing moderate temperatures, rain showers and abundant ripe fruit present across the Michigan fruit belt, growers need to be sure to keep this fruit protected through the harvest period. The decision to spray should be based on the presence of SWD flies and ripening or ripe fruit that are susceptible, plus the history of pest management inputs to each field. A monitoring program in these crops is recommended throughout the harvest season. From preliminary tests conducted at MSU, ripening and coloring sweet and tart cherry fruits are susceptible to SWD infestation. 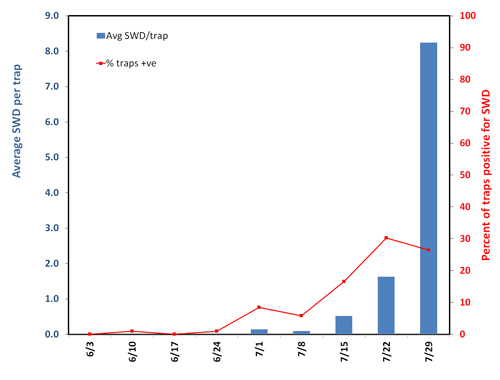