Spotted wing drosophila (SWD) numbers remain quite low throughout the state, and the majority of catches have been trapped in southwest Michigan. All catches this week were reported in small fruits: strawberries, raspberries, grapes and blueberries. In Berrien County, we trapped one male in raspberries, two females in high-tunnel strawberries and one male at a wood’s edge near strawberries and grapes. In Van Buren County, we trapped four males and four females in raspberries outside of high tunnels and two males and three females in raspberries in high tunnels. Also in Van Buren County, we trapped one female at the edge of a vineyard adjacent to a woodlot. Two females were trapped in a commercial blueberry field, three flies in an unsprayed blueberry field and an additional four females were all found in Allegan County traps. One female was caught in Oceana County in tart cherries. Overall, we are catching 0.91 flies per trap and 5.8 percent of all the traps in the state are catching flies.

As raspberries and blueberries are ripening, Michigan State University Extension advises growers to be sure to keep this fruit protected through harvest. Much of the strawberry harvest is finished in southwest Michigan, and females are likely attracted to fruit remaining in the fields. Growers should make their decisions to spray based on the presence of SWD flies and ripening or ripe fruit that are susceptible. Growers should maintain a monitoring program in these crops through harvest.

We have had two reports of SWD being trapped in tart cherry orchards in the past two weeks. As cherries are at high risk for infestation, growers with ripening tart cherries should continue monitoring for this pest through harvest. 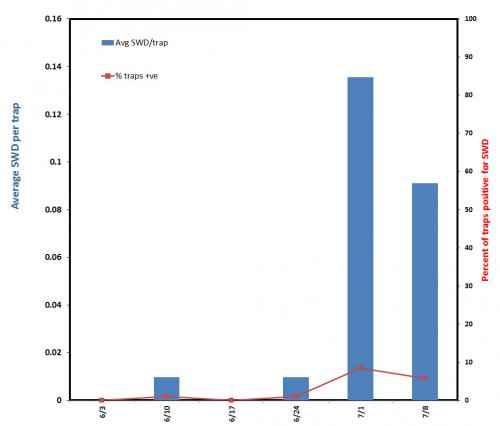