According to the recently released U.S. Department of Agriculture (USDA) nursery crops summary for 2015, Michigan had a total of 614 nursery operations that cover 10,500 acres of production area in 2014. The gross sales of the nursery industry were $231 million dollars in 2014. Sixty-four percent of Michigan’s nursery operations had field-grown crops that accounted for 76 percent of the total acreage devoted to nursery plants. The total amount of field-grown plants covered 8,000 acres and container-grown plants covered 2,300 acres in 2014 (Figure 1). The narrow-leaved evergreens, conifers, were the largest segment (53 percent) of the field-produced plants while deciduous shrubs were the largest segment (46 percent) of the container-grown plants. 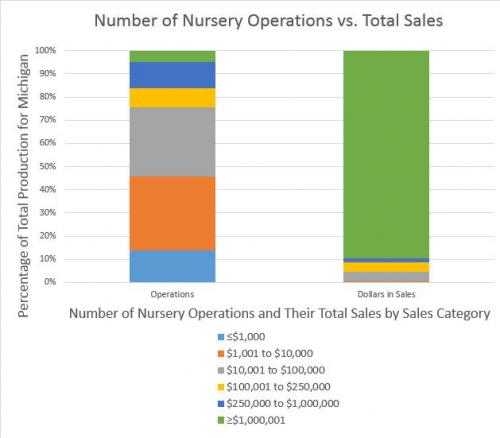 Figure 2. Total number of nursery operations and their proportions of total sales by sales category in Michigan.

The number of operations that produce woody plants has strongly decreased between 1999 and 2014. There were approximately half of the operations and half of the acres in production in 2014 compared with those of 1999. In comparison, the number of operations and acres of production of herbaceous plants has not decreased as much. In 1999, there were 1,950 acres used for growing herbaceous perennials while there were 1,650 acres in 2014.

Ottawa County had the greatest number of nursery operations (68) followed by Berrien County (31) in Michigan in 2014 (Figures 3). The county with the largest number of acres of production of nursery plants was Ottawa County (2,890) followed by Allegan (1,100) and Berrien (460) counties (Figure 4). Over half (56 percent) of the nursery production for the state is in the southwestern corner of the Lower Peninsula of Michigan. In southeastern Michigan, the county with the largest nursery plant production was Washtenaw County (280 acres) followed by Livingston County (220 acres). In northern Michigan, Mason County led the region in production with 195 acres followed by Lapeer (185 acres) and Genesee counties (160 acres). 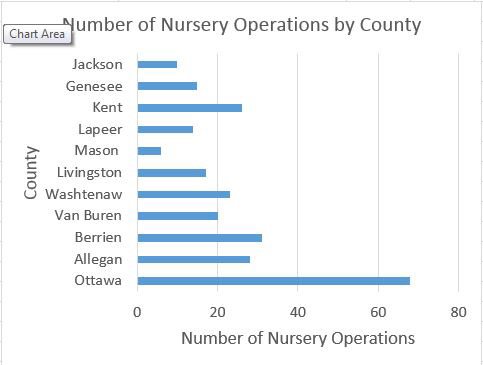 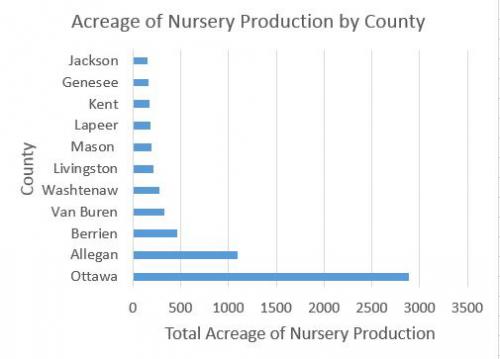 Figure 4. Counties with the greatest acreage devoted to nursery production.