MSU Extension to the rescue - literally!

How an August Summer Discovery Cruise helped save lives on Lake Erie.

Michigan State University Extension, Michigan Sea Grant and the Huron-Clinton Metroparks collaborate to offer educational cruises – Summer Discovery Cruises – on Lake St. Clair and Lake Erie to the public during the summer. One of the keynote Summer Discovery Cruises on Lake Erie is the Bob-lo Island cruise, narrated by Patrick Livingston, retired MSU Extension Educator and author of Summer Dreams – The Story of Bob-lo Island. On a recent tranquil August Saturday evening, our education vessel, the M/V Clinton, headed out onto Lake Erie on a course past Grosse 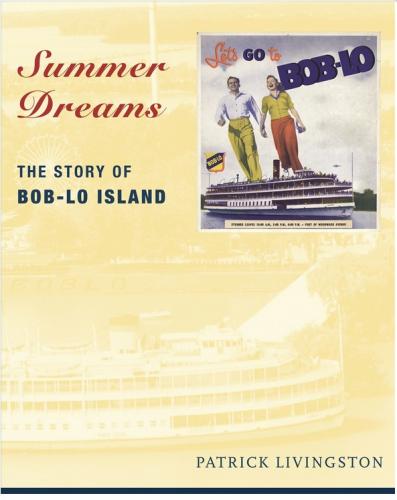 Ile and Sugar Island, through the “Hole in the Wall” of the Livingstone Channel and around Bois Blanc, the home of Detroit’s most popular amusement park for ten decades, Bob-lo Island.

As the Clinton sailed north past Sugar Island, we recounted the amusement park created on that site served by the beautiful but ill-fated steamer Tashmoo in an era when a dance-happy public would dance all the way to the park, all evening at the park’s dance hall and all the way back home. But Sugar Island couldn’t compete when Bob-lo’s incredible dance hall, the second largest in North America, was completed in 1913. Bob-lo quickly became the preferred destination of choice for generations of Southeast Michigan and Southwest Ontario park-goers.

The Clinton hovered off the island dock from which hundreds of thousands streamed every summer from the steamers Columbia and Ste. Claire as we listened to the recording of a CKLW remote broadcast from Bob-lo on an August day half a century ago. As we departed the dock, we gave a salute from a recording of the Columbia’s whistle – a farewell to an era of simpler pleasures.  Then, something unusual happened.  While monitoring VHF marine radio traffic, our Captain heard Sarnia (Canada) Coast Guard Radio broadcast a Mayday distress call regarding a Personal Water Craft near Bar Point going in circles off shore with no persons on board. Our Captain informed the MSU Extension staff on board of the alert, and asked them to keep an eye out for persons in the water.  The air temperature was 71.6 Fahrenheit with a wind speed of 11.5 mph, and waves a foot high. 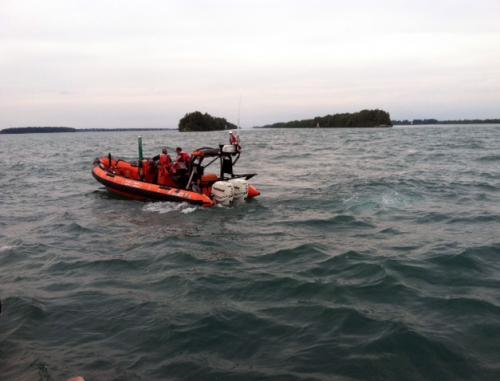 The Clinton reentered a choppy Lake Erie on our return route and our Captain soon pointed ahead to the green DL7 channel buoy from which two people were clinging. As the Clinton approached the buoy, one of the people began to swim toward the boat and climbed the boarding ladder we had deployed. He appeared to be about fifteen years old, was shivering and appeared hypothermic. After MSU Extension staff had assisted him to a seat, the young man explained that he and his father had been on a jet ski and had been thrown off by the choppy waves. The jet ski was taken by the current into the lake and they could not safely attempt to retrieve it, choosing instead to cling to the buoy. He thought they had been in the water approximately 45 minutes, and both he and his father were wearing Personal Flotation Devices.

As we tied up and bade our passengers adieu, our crew reflected on the rescue, the need for safety aboard any vessel regardless of size, and the fact that our safety training each season – including “man overboard” drills – had prepared them to act quickly, calmly and effectively. So calmly and effectively, apparently, that one participant wrote on their cruise evaluation forms “we especially enjoyed the rescue re-enactment – well done!”  While we don’t promise excitement of this magnitude on every Summer Discovery Cruise, we can promise that participants will have a unique learning experience.

If you’re interested in learning more about our magnificent Great Lakes, consider participating in a Summer Discovery Cruise next summer. You can find all the details at www.discoverycruises.org. Don’t miss the boat!

Michigan Watersheds and how our actions influence water quality