To help bring awareness to this week, each day Michigan State University Extension (MSU Extension) and Michigan Sea Grant are featuring two different invasive species (one aquatic and one terrestrial species) that have invaded or has the potential to invade Michigan’s environment. Today’s featured terrestrial invasive species is Himalayan Balsam.

Himalyan Balsam (Impatiens glandulifera). Himalayan Balsam is a terrestrial invasive annual herb that is currently on the Michigan Watch list. According to the Michigan Department of Environmental Quality, invasive species on the watch list are priority species that have been identified as being an immediate and significant threat to Michigan's natural resources. Watch list species either have never been confirmed in the wild in Michigan or have a very limited known distribution, or are localized. In the case of Himalayan Balsam, it has been detected in Michigan on Sugar Island in Grosse Isle and in the Upper Peninsula near Sault Ste. Marie, Grand Marais, Munising, and Chatham.

Himalayan balsam grows between three to six feet tall. It has egg-shaped to elliptical shaped leaves with serrate leaf margins. Its stems are purple/red, smooth, hollow and appear six-sided when viewed in cross-section. On each stem, there are five to ten showy flowers which bloom in the summer. Flowers have five petals each of which are purple, magenta, blue, pink, or white in color. The fruit capsules explode when ripe and touched. It thrives in moist, riparian habitats such as wetlands, swamps, stream and riverbanks, floodplain forests, yards, gardens, and along ditches and roadways.

Native look-alikes and how you can tell them apart: 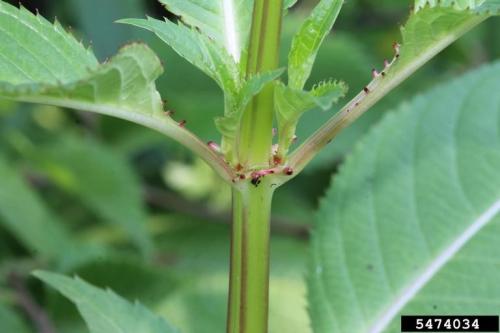 Himalayan balsam is thought to create much competition with native species by possibly altering the behavior and make-up of pollinating insects. In addition, because it thrives in moist habitats, when a thriving population has established, it is thought to alter water flow which increase potential for erosion and flooding.

Himalayan balsam produces a seed pod which produces an abundance of seeds which are also dispersed via water.

The seed pod of Himalayan balsam explodes, and further serves to disperse seed.

Himalayan balsam can be controlled mechanically via hand-pulling, mowing, or cutting, or with general use herbicides.

Early detection and timely reporting of occurrences of Michigan watch list species such as Himalayan balsam are crucial to minimizing the spread and limiting negative ecological and economic impacts. It should be reported immediately to Sue Tangora, Michigan DNR Wildlife Division (tangoras@michigan.gov). Take several photos of the plant and make note of the location, date and time of the observation as this will be very helpful in the verification of the report. You may be asked to provide your name and contact information if follow-up is needed. You can also use the Midwest Invasive Species Information Network (MISIN) online reporting tool. MISIN also offers a smartphone app that allows convenient reporting from a phone.