Duplachionaspis divergens (Green) has been detected in Michigan greenhouses and nurseries and attacks a variety of ornamental grasses. Little information is known about its lifecycle and potential for damage, but here are some options for control.

Michigan greenhouses and nurseries need to be on the lookout for a new armored scale pest, Duplachionaspis divergens (Green), that has been found on Miscanthus sinensis and Pennisetum alopecuroides. Both of these ornamental grasses are widely grown by Michigan growers. Look for adult female scales that are whitish on the blades of ornamental grasses (Photos 1-3). The scale cover is about 3.5 times as long as wide, with a light brown-tannish terminal exuvia. 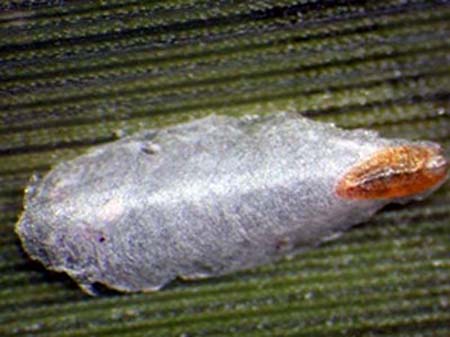 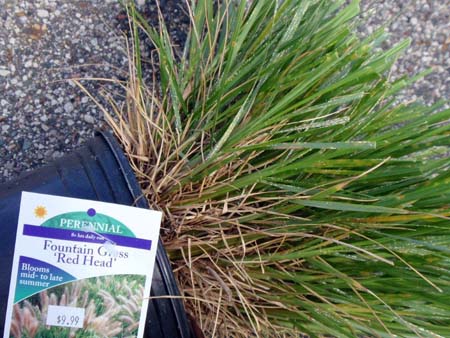 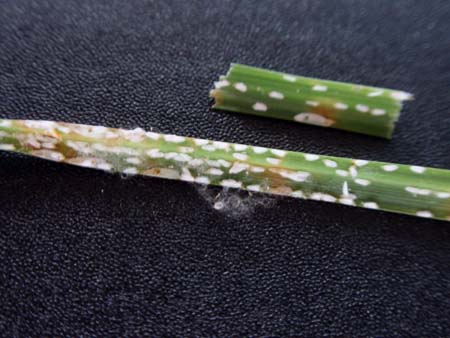 Duplachionaspis divergens is the most commonly encountered armored scale insect on ornamental grasses in Florida. It is suspected that the infestations found in Michigan was a result of plants either brought back from southern states or shipped here from greenhouses or nurseries in the south. I recommend you carefully inspect any ornamental grasses obtained from anywhere to guard against spreading this pest. Michigan Department of Agriculture and Rural Development inspectors will restrict any plants that they find and you will not be allowed to sell them until they are free of an infestation.

Little is known about the biology other than a few reports that the female scales in Columbia can produce up to 130 eggs with crawler emergence about eight days after egg deposition. The scale is known to produce multiple generations per year. At this point we do not know if this scale can survive outdoors during the winter in Michigan. However, it may survive in poly-houses. As far as damage is concerned, like any scale insect, they can reduce the vigor and health of the plant making it unsalable at retail.

Control strategies if the scale is found this fall include treatment with the insecticide Safari as a drench followed by pruning the foliage off about five days later as close to the crown as possible. The insecticide will kill any scales that are on the plant, even those that may survive in the crown area. Removal of the foliage and destroying it will prevent infestations to other plants.