Michigan is only one of the eight Great Lakes states that is battling the aggressive non-native phragmites, or “common reed.” Ornamental plant nursery growers should scout production fields for this invasive weed and control it.

The non-native sub species of Phragmites australis has become a widespread problem in Michigan and surrounding Great Lakes states. Hundreds of acres of wetlands and shorelines are being overrun by this aggressive and invasive plant (Photo 1). It has caused many wetland areas to see changes in the native plants communities – being replaced by phragmites causes serious ecological, economic and social issues. Many areas of the state have received funds to carry out widespread phragmites management programs to take back wetlands from this invasive plant. One such program, the Ottawa County Invasive Phragmites Control Group, is occurring along the Grand River near Grand Haven, Michigan in Ottawa County.

Michigan State University Extension encourages ornamental nursery plant growers to scout fields to be sure this invasive species does not show up in your nursery stock production. Photo 1 shows a mature plant, and I suspect a nursery will only see a much smaller-sized plant if detected in a production field. (Photo 2). It is a concern to the Michigan Department of Agriculture and Rural Development nursery inspectors and if found, will cause the field to be restricted. That being said, growers need to be able to recognize the plant. 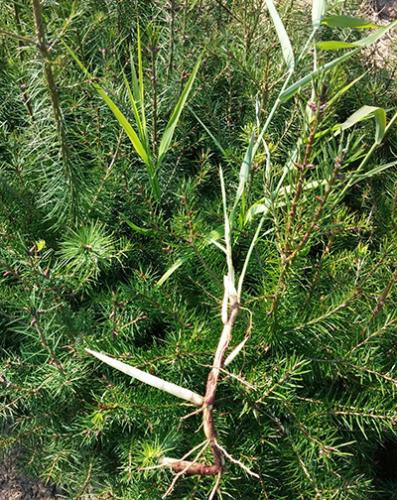 According to the Michigan Natural Features Inventory, Phragmites australis is a warm season perennial grass that will reach 15 feet in height and can produce a dense mat of belowground biomass due to its prolific rhizomes which can grow to a depth of 6 feet into the soil and the rhizomes can survive for six to seven years. Leaves on the plant are stiff and anywhere from 0.5-2 inches wide at their base. They form a point at the end of the leaf. Plants are usually grayish-green during the growing season and have a purple-brown-silver seed head which remains on the plant after the leaves fall off in the fall. The seed heads are capable of producing a significant amount of seed, in the neighborhood of 2,000 per plant.

A native subspecies of phragmites also can occur, but is less prevalent in Michigan. To help you determine between the two, learn about the technical characters of phragmites and read “Phragmites – Native or Not”

If you find this weed in your nursery, you need to control it to prevent any spread within the field and hitchhiking of any part of its root system with plants that are dug and shipped from your fields. Treatment with glyphosate at 1-1.5 percent solution applied after the plants are in full bloom in the late summer through the first killing frost should be effective. A repeat application may be necessary if some re-sprouting occurs in the next growing season. Do not attempt to do any hand removal, disking or tillage that will cause any breakage of the rhizomes until at least two weeks after the plant was treated with glyphosate. That will enable the herbicide to fully translocate in the root structure. Any nodes or root pieces that are not killed with the herbicide may re-sprout the following year adding to your problem. Dead plant material should be left in place and monitored.

If it is necessary to handle live or dead phragmites plants or plant parts, bag them securely and send to a landfill to prevent the spread of phragmites to other areas. Composting is NOT ADVISED since all seeds may not be destroyed by treatment.

For more information on the do’s and don’ts of treating invasive phragmites, please visit Phragmites Treatment.

For addition information on phragmites