Autumn is the time of year to treat stands that have been infected with the oak wilt disease.

In the forest, autumn is the season of color change, bird hunting and preparation for the upcoming winter. Many consider autumn the finest season of the year. However, according to Michigan State University Extension, autumn is also the time of year to treat stands that have been infected with the oak wilt disease. For more information on treating stands, see "Oak Wilt in Michigan's Forest Resource."

During the summer, foresters locate, examine and confirm sites infected with the oak wilt disease. They identify dead and dying trees. Tree diameters and a reference chart determine the perimeter, which is marked in several ways, in preparation for the treatment. Come autumn, the big machinery is brought on-site.

Oak roots graft to each other, allowing the oak wilt fungus to spread from tree to tree until all the connected oaks are dead. The root connections must be severed to stop the underground spread. To accomplish this task, a vibratory plow slices five feet into the ground. The plow must be pulled by a piece of heavy equipment. Boulders and rocky soil can be a challenge. A bulldozer is often needed to clear a path for the vibratory plow.

Following the vibratory plowing, all the oaks within the perimeter must be removed. White oaks are the exception, as their roots do not typically graft to each other. The oaks that died this year must be handled specially. Should the trunks or logs of these trees remain until next summer, the fungus will fruit and the disease can then be spread overland, to new locations if the logs or firewood is moved.

The oak removal is what creates the greatest visual change. If the stand is mostly oak, then most of the stand will be cut. If other tree species are mixed-in, then the visual impact will be significantly less. The plow line soon disappears and usually cannot be found after a couple growing seasons.

The treatment cost of oak wilt might be around three dollars per foot. Vibratory plows that reach five feet deep are not common and often unavailable. A single stand will drive-up the unit price. Multiple stands treated at the same time will bring the price down. However, it is expensive either way.

Residential treatment applications can be confounded by underground infrastructure, driveways, walks, gardens, property lines and many other factors. However, high-value residential oaks may be treated with an injected registered chemical that protects individual trees. The treatment needs to be repeated every two years. For homeowners, the injection costs might a viable option. 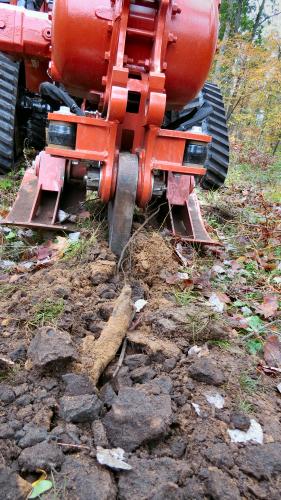 Prevention is far cheaper but not always possible, as nature has a role. Avoiding physical damage to oaks between mid-April to mid-August is wise. Timber harvesting and utility rights-of-way maintenance during this time, when oaks are part of the residual stand, is risky business. Damage to oaks from residential activity should be avoided during this time period, especially pruning. If you buy oak firewood, you might want to think twice about moving it to home or camp. Was the harvested oak firewood free of oak wilt?

Most Michigan counties with an oak resource now have reported cases of the oak wilt disease. In some counties, the disease is widespread. In other counties, known epicenters are more isolated. Of course, there are certainly many epicenters currently unknown. Also, other oak health issues can mask oak wilt, such as delayed drought effects and the two-lined chestnut borer.

Once an area oak resource has been killed or successfully treated, oak can be re-introduced. Oak seedlings, not stump sprouts, are usually free to grow. The oak wilt fungus requires live tissue to survive. Risk of re-infection from overland transmission is relatively low for the first couple of decades of a new oak forest. However, oak wilt will remain in Michigan. Human activity will most likely move the disease into previously affected stands as time goes on.

Oak wilt is here to stay. However, at least some of the oak forest resource can be managed to remain in the landscape.

Woody Biomass for Energy in Michigan: So, You Want to Establish an Energy Plantation? (E3095)