Oak wilt is one of the more pernicious exotic forest diseases currently affecting Michigan forests. It spreads easily, often with the help of people, and remains in an oak stand until all the oaks are dead.

Oak wilt (Ceratocystis fagacearum) is an exotic fungus of unknown origin. It’s related to the fungus that causes Dutch elm disease and many other plant diseases. The disease is not new to Michigan, but recent interest has grown as both the disease and people expand into the forest. The disease was first identified in southern Wisconsin in the mid-1940s.

Oak wilt kills by feeding on the living tree tissues under the bark. The subsequent tissue death interrupts the flow of water and nutrients, causing leaves to brown and prematurely fall from the tree. The change from healthy to death can occur in as little as three weeks.

The fungal spores are introduced to the tree via sap-feeding beetles that are attracted to fresh oak wounds. Typically, that tree will die the following growing season. The season of this overland beetle transport runs from mid-April to mid-July.

Once in a stand, the fungus will move from tree to tree through the grafted root systems. Trees in the red oak group are highly susceptible. Trees in the white oak group, on the other hand, are not as vulnerable. Every susceptible oak connected to the root system will die, although the disease spreads a few trees at a time. Fortunately, there is usually time to deploy treatment.

While oak wilt is present throughout much of Michigan, much of the initial treatment history has been in the Upper Peninsula. Most of the oak resource lies in the Lower Peninsula, where treatment programs have been more recently begun.

For most of the past 13 years, oak wilt has been treated in the southern Upper Peninsula, particularly in Menominee County. However, oak wilt had been present before that time and had been spot-treated with methods no longer used.

The current treatment identifies the extent of the disease underground and then severs the root systems along that perimeter to a depth of five feet. Subsequently, all the trees within the perimeter that belong to the red oak group are removed. Oaks that died in the current year are decked separately, as they may produce fungal fruiting bodies next spring. 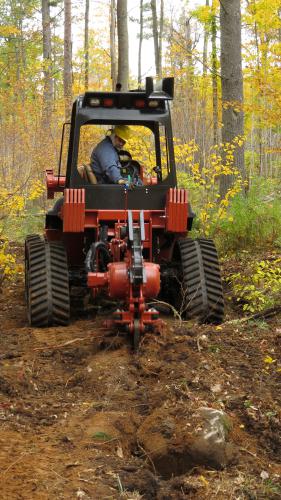 In the treated areas, any oak stump sprouts will die as the disease continues to spread underground. Once the disease reaches the severed roots at the treatment perimeter, the fungus has nowhere to go. Without standing dead oaks to produce fruiting bodies, the disease dies-out in that location. The fungus requires living tissue.

Since 2004, about 250 sites have been treated on both public and private forest, severing nearly 40 miles of root systems. Funding has been provided by the U.S. Forest Service State & Private Forestry, with implementation by the Michigan DNR and Michigan State University Extension. The total cost of the treatment has reached about a half a million dollars, not including the oak harvest. The treatment, when deployed properly, is highly effective but results in strong visual change.

The disease was likely first introduced to the southern Upper Peninsula by campers at Shakey Lakes County Park who transported infected oak firewood, probably from Wisconsin. The County Road Commission and others helped spread the disease by trimming oaks during the infection season. By the time an aggressive control program began, hundreds of oak woodland acres had died. Merged disease epicenters of 40 to 60 acres were treated. The landscape appearance changed dramatically. Much of the disease has now been contained, and the spread has been slowed to a crawl.

This year, about 40 to 50 small sites will be treated in Menominee County, most of them under one acre. All of them are recent infections. These sites can be difficult to find, much like needles in a haystack. Finding logging contractors to remove these small quantities of oak is difficult.

On state forest land, most of the disease has been eliminated. On private land, some forest owners have refused to treat oak wilt in their forests. These untreated areas serve as sources of new infections to oak woodlands, including those that have been treated in the past. Also, the disease can move across the Menominee River from Wisconsin, where control programs do not exist.

What can be done with these sites after treatment? Sometimes, the stands had a mix of tree species, often aspen, red maple and pines. This residual will soften the blow of removing the oaks. Most of the time, however, the stands were nearly all oak. On better soils, there may be advance regeneration, including seedling-origin oak (not stump sprouts) that may partially regenerate the stand. On poorer sites, planting may be required. Red pine is an excellent choice on many sandy soils.

Planting oak is also an option. By the time the oak seedlings reach a size large enough to be susceptible to oak wilt, the disease may no longer be in the landscape. This will take 20 to 30 years. However, oak wilt will likely be with us forever.

Historically, oak woodlands were not as common as today. The American Indians would burn these areas regularly. The oaks grew largely after the cessation of fire. However, they may not be the best ecological fit. Much of that country wants to be pine, combinations of jack, red and white.

Oak wilt is an important and growing problem with our forest resource. Treatment is possible but it’s both invasive and expensive. The aftermath often requires some thought as to setting desired future conditions, which is routine for forest management, regardless of the cause.

Celebrating the history of maple syrup