Sorghum is a close relative of corn and has similar growth habits. Sorghum is an annual crop that has been used as an emergency livestock feed, particularly when forage supplies are tight. The United States produces 7.2 million acres of grain and forage sorghum annually. Typically, sorghum will complete its life cycle in one growing season starting with planting seed, then vegetative growth, followed by reproductive growth where a seed is produced in the tassel and is ready for harvest by fall.

Photoperiod sensitive sorghum will not initiate floral development until the photoperiod is less than 12 hours and 20 minutes per day. From Table 1, on July 1 in Lansing, the sunrise is at 6:04 AM and the sunset is 9:20 PM – that is a photoperiod of 15:16. The day length on September 19 is 12:19. For Lansing, floral development wouldn’t occur until September 19. This provides much more time for vegetative growth.

Table 1. Day length for Lansing by date. Note that the days get shorter as the growing season progresses. Photoperiod sensitive sorghum will not flower until after September 19, providing for a longer season for vegetative growth, resulting in higher biomass yields.

You can find out the day length for your location by going to the Astronomical Applications Department website.

Photoperiod sensitive sorghum is planted and managed similar to corn. Photoperiod sensitive sorghum should be planted on 30-inch rows with populations of 60,000 to 100,000 plants per acre. Fertilize with 100 pounds of nitrogen per acre and base P and K applications on soil test results. Sorghum tends to be more drought-tolerant than corn and can be planted on lighter, sandy soils. Plant into soil moisture up to 2 inches deep. Cool soils slow emergence and can promote disease development. Control weeds with preemergence herbicides such as atrazine or metolchlor. There are no options for post-emergence control for grasses.

Table 2. Yield of four sorghum varieties, switchgrass and miscanthus in 2010 at the Kellogg Biological Station. Data came from randomized complete block design with four replications. Energy sorghum yield included the grain. This is data from one growing season. It is recommended that multi-year data be used when making planting decisions. 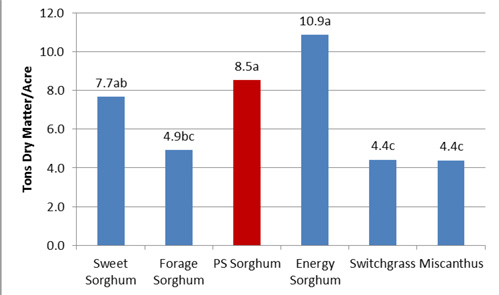