Picking the right pumpkin from the patch

Colorful with interesting shapes, today’s cucurbits, or pumpkins, may actually surprise you!

Plants knows as “cucurbits” can be colorful, decorative and even spooky-looking! So what is this curiously named plant? It’s the humble pumpkin, our beloved Halloween icon! Pumpkins, squash and gourds comprise some of the most interesting plants in this family known as Cucurbitacea or simply cucurbits.

The scrambling annual vines of this group of plants produce blossoms resulting in fruits with thick, edible flesh. Cucurbits such as pumpkins and gourds may be very colorful, vary in size, and can appear smooth, ridged, lumpy or horned. Native to South America, the durable plants have been an important food source for native people across the continent. Records indicate that this group of plants made their way to other continents shortly after the discovery of the “new world.”

One of the most interesting science facts about cucurbits is that each plant produces both male and female flowers. Male flowers most often emerge before the female flowers, which when pollinated, will result in a fruit. Weather patterns can affect both pollination and fruit set, so often gardeners are disappointed in the number of fruits their plants yield at the end of the season. Michigan producers have dozens of cultivars to choose from and with the good growing season, the crop is abundant.

If you are looking for a traditional, round to oval, orange orb this Halloween, cultivars such as the traditional ‘Howden’ will do fine. In the pumpkin world, names are everything. ‘Mrs. Wrinkles’ sports deeply grooved, dark-orange skin. Giant pumpkin strains offer the easily spooked trick-or-treater a thrill with their overwhelming size. Germinating from seed that originated from a grower in Nova Scotia, 50 to 100 pounders are common in this group. The current world record weighed in at over 2,000 pounds. This time of year, displays of prize-winners can be found at public gardens, fairs and other festive events.

In recent years, white became the new orange in pumpkin displays with smooth-skinned, white cultivars known as ‘Lumina,’ ‘Valenciano,’ ‘Moonshine’ and the miniature-sized ‘Baby Boo.’ But why stop with white? Many cultivars today have gray-green coloration and may be short in stature, but are not short on character. Deeply incised lobes give this group of pumpkins the true “Cinderella’s carriage” effect. A bright scarlet, French pumpkin, ‘Rouge D’ Etampes’ adds contrast to a fall display akin to a fiery globe. 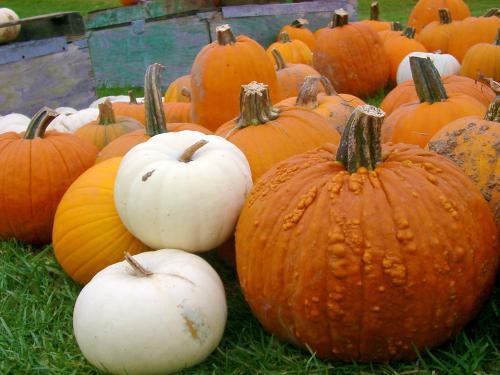 Interesting characteristics have also adorned recent releases of both pumpkins and gourds such as bumps, wings and warts. Seems to be the more gruesome, the better as exhibited on the cultivar known as ‘Knuckle Head.’ It is so bumpy it takes on a personality all its own. Gourd mixes and blends just seem to get more and more distorted, adding to their interest in the fall display or individual table-top adornment.

No matter what type you choose this fall, be sure the skin is not kicked or broken which will allow rotting more quickly. Avoid allowing your pumpkins and gourds to sit in a wet area. Look for a stem that is still green and firmly attached for the same reason. While outdoor displays will last much longer, an indoor display will last better if placed in a cool, dry room or porch.

For more information on a wide variety of smart gardening articles, or to find out about smart gardening classes and events, visit www.migarden.msu.edu or contact MSU’s toll-free garden hotline at 1-888-678-3464 with any of your questions.

Start with a soil test for garden success