In woody plants, the buds signal the end of eco-dormancy and the start of spring growth.

Everyone in Michigan is anxiously awaiting spring and warmer temperatures to arrive. Few of us are as patient as the woody plants around us. They have been patiently waiting since mid-January for warm weather. Last fall, as the days got shorter and temperatures fell, perennial plants got ready for winter. Sugars were stored as starch in the shoots and roots. Proteins in the leaves were broken down and reassembled as storage proteins in the shoots and roots. (See the Michigan State University Extension article “Fall color show and winter dormancy in woody plants.”) These materials were stored for the explosive growth we often see in spring as trees and shrubs leaf out rapidly under warm conditions.

The plants waited out the frigid weather of winter in a dormant state called endo-dormancy. To prevent growth during warm periods in the winter, the plants track chilling hours, or temperatures above freezing. (See the MSU Extension article “Winter dormancy and chilling in woody plants.”) Many of our plants completed their chilling requirements in January. By the end of January and in early February, buds would swell and open in a couple of weeks. Now cutting rapidly start to grow and flowers develop. (See the MSU Extension article “Forcing cuttings to determine the end of dormancy in fruits and other plants.”) 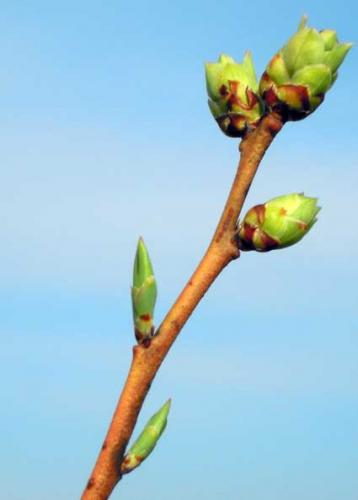 The plants are now in what is called eco-dormancy, when the environmental conditions prevent growth. This might be because it is too dry or too hot. Right now plants are not growing because it is too cold. Plants depend on the temperature of the environment to be warm enough to perform the chemical reactions necessary for growth and development. For many cold climate plants, the temperature below which development does not occur is 42 degrees Fahrenheit. This lower temperature threshold is often called the base temperature. Getting up into the 40s for a few hours and then dropping down into the lower 20s at night does not allow a lot of growth, but when we climb into the 50s or 60s or the temperature doesn’t drop below freezing, the buds will really start to move.

Growing degree days can also be used to compare one growing season to another. During the hot March of 2012, many parts of Michigan were a month or more ahead of normal. (See the Enviro-weather growing degree day map for March 23, 2012, and look at the last map on the page.) In 2012, fruit growers were concerned that below freezing temperatures in April would cause severe damage to the fruit crop, and they eventually did. This year, most people are concerned that we are behind and it is not even the end of March. Actually, we are only a few days or a week behind. (See the Enviro-weather growing degree day map for March 23, 2013, and again the last map shows if the season is early of late and by how much.)

As the buds start to grow, they need to change their chemical machinery from withstanding extreme cold to sustaining rapid growth. They quickly use up the sugars and other nutrients they have and send a signal to the adjacent tissue to wake up and send nutrients to the new growth.

Right now the growing buds are still waiting in the northern part of Michigan and are just getting started in southern Michigan. As soon as the growth of the buds becomes more noticeable, we will start to worry about the impact of spring freezes on fruit trees and other flowering trees and shrubs. (See the MSU Extension article “Freeze damage depends on tree fruit stage of development.”)

Most of Michigan’s fruit growers are quite happy that March was cooler than normal and that Michigan’s fruit crops are only beginning to start growth. They are happy that in 2013 they are a week or two behind normal and not a month ahead of normal as they were in 2012. (See the MSU Extension article “With a backwards spring, Mother Nature pitches a change-up after a fastball.”) This cool spring promises a more normal season in 2013 and hopefully a bountiful fruit crop.

Soil test before you plant blueberries