Poa annua putting greens have been showing signs of stress in the last week that may be related to winterkill.

In the last couple days I’ve received reports from several golf course superintendents indicating that Poa annua on putting greens that emerged from winter looking good are now declining. It is possible that this is winterkill to the lower region of the crown that is responsible for root initiation. 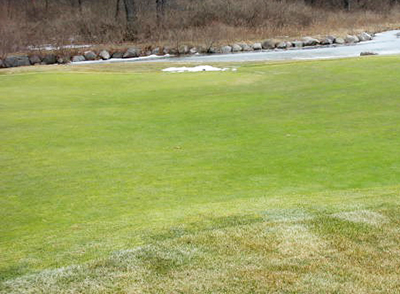 Back in 2003, Beard taught the turfgrass physiology class at Michigan State University and I was fortunate to attend many of his lectures. I recall Beard describing a scenario in Detroit one spring when Poa annua emerged from winter looking just fine and in the matter of a couple days when the temperatures warmed, everything died. He indicated this was the result of the lower crown suffering winterkill and although many thought the Poa annua was just dying over the weekend, it was in fact already dead. Without the ability to grow roots, the Poa annua didn’t survive long once the plant started “demanding” water. Take a look at the crown; if it's white and firm, all is well, and if it's brown and mush, it's dead.

I’m not certain this is what happened this year or if it’s typical freezing injury that is the result of cold night temperatures. Freezing injury is typical this time of year and is especially evident on lawn height Kentucky bluegrass where the symptoms are tanning of the leaf blade down from the tip. Warm temperatures and rainfall in the forecast should reveal whether or not what is being reported is indeed winterkill or, hopefully, something less significant. 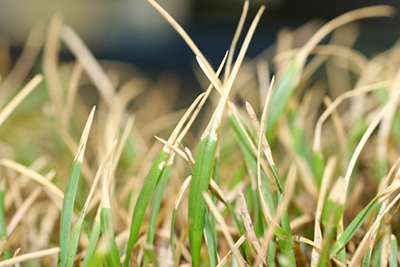