Poison ivy: Can it grow on trees?

When collecting firewood, don’t be fooled. Poison ivy can grow on trees.

When I was a kid my mother used to tell me “It doesn’t grow on trees!” Of course she certainly wasn’t talking about the dreaded “leaves of three.” When ambling through the woods, cleaning up the garden or taking a fall camping trip, we often don’t look up when it comes to scouting for poison ivy (Toxicodendron radicans). Aptly named with the Latin words Toxicum or “poison” and dendron “tree,” one might get the idea that a robust poison ivy plant isn’t “ivy-like” at all!

A native plant widely distributed from our eastern states west to Nebraska into the northern reaches of Canada and down to the tip of Florida, this thrifty plant is often viewed as a gardener’s nemesis. The plant can be confused with other three-leaved beauties and for some reason, people remember the experience they had with poison ivy, but not what it looks like. Could this be because poison ivy is a sneaky little culprit, hiding among other similar looking plants? Nestled within a garden hedge or ornamental ground cover, this “masquerader” sometimes pops up in the least expected locations.

With polymorphic leaves – a big word for leaves with multiple shapes – and either a scrambling habit or with support of a fence post or tree or other sturdy, plant, this character is definitely a Jekyll and Hyde in the garden. It conveniently co-mingles with other vines such as Parthenocissus (Boston ivy) or common brambles. Both have tri-foliate leaves like poison ivy and the brambles have thorns – poison ivy does not.

Poison ivy's glossy green leaflets have a reddish coloring to the new spring growth. Leaflets do not have evenly serrated edges, but rather coarse lobes appearing jagged or tattered. However, don’t be fooled by one that is without lobes. As this plant matures, leaflets will have smooth edges or are called “entire.” For more on how to identify poison ivy and to see more pictures, see "Identifying poison ivy isn't always easy to do" by Michigan State University Extension. 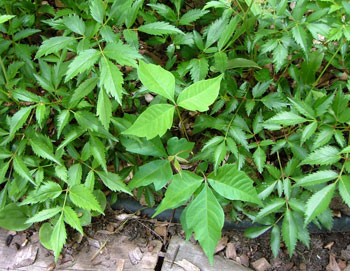 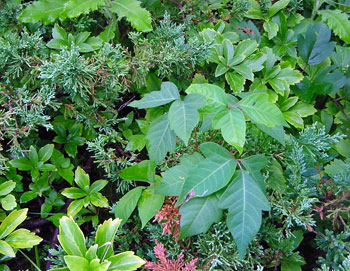 Poison ivy can lurk anywhere, including your favorite ground cover and shrub beds.

When is a tree not a tree?

When a poison ivy plant germinates near a support such as a tree or fence post, it can become an aggressive woody vine. A mature plant growing up a telephone pole often takes on the look of a nice landscape specimen. It can sprout limbs that extend out 6 to 8 feet from its "hitching post," appearing as an extension to the leafy tree. I have known people who have reached up into a canopy of what they thought was a tree and ripped off leaves to take a look at them. Oops!

You may think of poison ivy appearing only along roadways, forgotten farms or shady corners of obscure camping areas. People deny that poison ivy exists in the city, even when they get the irritating rash. “It’s never been there before,” they say, not realizing that a seedling may have popped up and gone unnoticed for several years. I’ve seen established plants in sunny or shady sites, public parks, golf courses and even people’s flower boxes.

A common question people have is, “Can I get poison ivy in the winter?” (when the plant is dormant). I can attest from personal experience the answer is “Yes!” The oils in the plant are persistent and exist in both foliage and stems, although wildlife and birds seem to have no effect from browsing on this plant. If you're collecting firewood, MSU Extension strongly encourages you to become familiar with what the vine looks like as it grows up the trunk of a tree when splitting or using wood. The stem is easy to identify because of its brown, hairy rootlets covering the trunk. 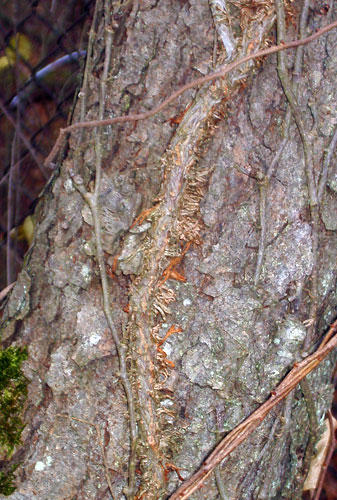 It is easy to tell poison ivy stems by the “hairy”rootlets along the woody portion.

According to MSU Diagnostic Services specialist Angela Tenney, if the plants still have viable leaves on them, they can be controlled well into the fall season. Treat with a systemic herbicide such as Glyphosate or a brush killer labeled with the compound Triclopyr and follow the label precisely. Woody specimens may be cut down and immediately “painted” or daubed with the herbicide using a paint brush for directed spot-treatment or equipment consistent with the product label. You can also use pruning shears or a hatchet to nick the trunk and simply apply the product to the open wound all the way around the stem. By next spring the plant should have taken up the chemical and will not leaf out.

Either way, when removing poison ivy, protect your skin with washable or disposable gloves, long sleeves and long pants. Wash your clothing and clean your tools with hot, soapy water. Never burn the plants as the smoke could carry the oil and allow you to breath in the poison. Even if you are exposed to poison ivy, remember to wash up when you go inside with hot, soapy water.

For more information on a wide variety of smart garden topics, go to the Gardening in Michigan website or contact MSU Extension’s toll-free garden hotline at 1-888-678-3464 with any of your questions.