Not surprisingly, potato leafhoppers have arrived in Michigan chestnut orchards. Growers should be scouting for and treating against this key pest of edible chestnuts.

I received an email from a grower yesterday, June 12, 2014, that potato leafhoppers have arrived and, given the storm systems that have been moving through Michigan, they are likely to begin appearing in more northern regions at any time. Like many plants, chestnuts are sensitive to the saliva of potato leafhoppers that is injected by the insect while feeding. Damage to leaf tissue can cause reduced photosynthesis, which can impact production and quality and damage the tree.

At this point in the season, scouting should be performed following storm systems originating in the southern United States. Early detection is important to prevent injury. For every acre of orchard, growers should select five trees to examine and inspect the leaves on three shoots per tree, a total of 15 shoots per acre. The easiest way to observe potato leafhoppers is by flipping the shoots or leaves over and looking for adults and nymphs on the underside of leaves. Pay special attention to succulent new leaves on the terminals of branches. Growers may also hang yellow sticky traps in the orchard to catch potato leafhoppers. Be sure to hang traps on both the edge and interior of the block.

For more information on how to identify potato leafhoppers and symptoms of damage as well as management recommendations, please refer to “Potato leafhopper management in chestnuts” from Michigan State University Extension.

For a list of currently registered insecticides, see “Pesticides registered for edible chestnuts, 2014.” 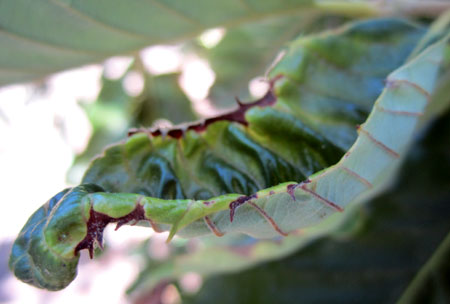