As wheat matures in central Michigan, minimize the risk of sprouting (low falling numbers) as some early grain loads suggest some fields are testing moderately low.

Pre-harvest sprouting of wheat is always a potential risk, but this season there is some concern given the past and current weather pattern and some early test sample results. In any event, here are a few reminders regarding the issue.

Pre-harvest sprouting sometimes occurs when natural dormancy is broken, triggering the kernel to behave as a germinating seed rather than a starch-storing grain. This process begins well before there is any visual evidence of sprouting. This is why for decades the milling industry has relied on a Falling Number test.

The Falling Number test score is actually the number of seconds it takes a plunger to fall through a grain/water slurry under very controlled conditions. The industry generally prefers grain measuring 300 seconds. Depending on the end-user, there is often significant concern when the seconds slip below 250 or 275.

Pre-harvest sprouting is more likely when grain is exposed to moisture in the form of rain, fog or high relative humidity. While the process may be more likely to begin at lower grain moisture levels, it’s clear that the process can occur as soon as grain reaches physiological maturity (35 to 40 percent).

There are differences in susceptibility among varieties. Soft white and many soft red wheat varieties grown in Michigan are considered susceptible or moderately susceptible. Linda Brown, PhD candidate at Michigan State Univeristy, has categorized many of Michigan’s commonly grown varieties relative to sprouting in “Wheat Variety Comments, 2017,” page 2 in the sprout column. 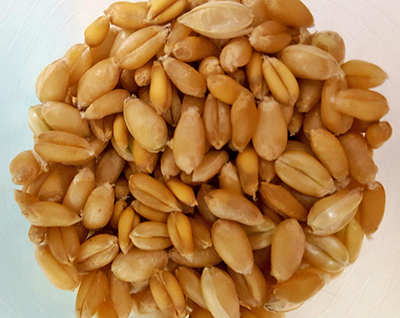 This grain sample tested 40 percent moisture (at or near maturity). Note the range of kernel development. A few kernels from the same head or adjacent heads were still slightly green and some retained inner husk.