Puncturevine: Another weed to add to your watch list

There seems to be no end to the weeds agricultural producers need to deal with. One weed that needs adding to your “weeds to watch” list is puncturevine.

Much time and expense goes into controlling weeds in any field-grown, agricultural cropping system. Many weed species are moving beyond their traditional ranges, often times due to man’s activities of moving plants, animals and equipment over long distances combined with the natural transmission mechanism of the weed’s seed. One such traveling weed in Michigan is puncturevine (Tribulus terrestris L.). 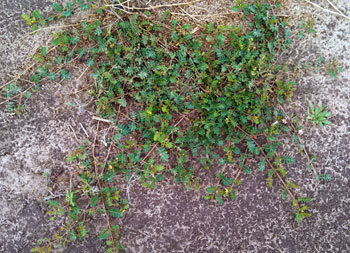 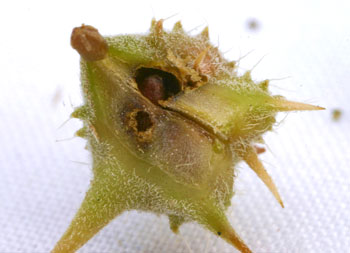 Puncturevine (Photos 1-2) was introduced to the United States from southern Europe and can now be found over much of the country and parts of Canada. It has been present in Michigan for over 20 years and the most recent USDA records report it in eight counties in the southern Lower Peninsula (Photo 3). A 1954 publication titled “Weeds of the North Central States” has it only as close as southern Missouri. Location information in Photo 3, however, is not up to date since the plant in Photo 1 was observed in Van Buren County. So the range in the state is surely larger than currently indicated. 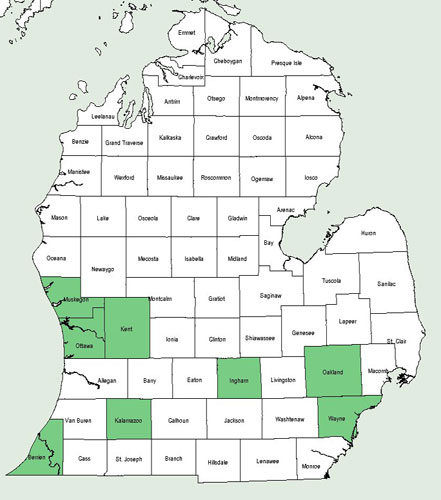 Puncturevine is an annual, prostrate, mat forming plant with stems 0.5 to 5 feet long. Leaves are divided into four to eight pairs of oval leaflets each 0.25 to 0.5 inches long. The yellow flowers are 0.33 to 0.5 inches wide and bloom starting in July. When mature, the fruit breaks into sections that have sharp spines with each section having two to four seeds with the seeds capable of staying dormant in the soil for four to five years.

The sharp spines on the seed will attach to anything that gets close enough to touch it and can spread when it attaches to livestock, pets and clothes. It can also attach itself to tires, even causing holes in some bicycle tires – hence its name. Due to its means of travel, once your field gets infested, it is highly likely to spread to other fields as workers and vehicles travel from field to field.

To minimize spread it is important to observe and remove plants as soon as they are spotted. Workers should be taught how to identify plants and bring them to your attention or remove them. The spot should then be watched for the next four to five years due to the length of time seeds can remain dormant in the soil.

Removal can be as simple as pulling the plants or using spot applications of an approved herbicide. This is especially important in a perennial crop like asparagus since little weed control takes place in asparagus plantings during the time puncturevine is most easily identified. Several preemergent products have control potential, especially those containing pendimethalin and trifluralin. Post-emergent products include glyphosate, paraquat, oxyflurofen, 2,4-D and others. More information on chemical control options can be found in the Michigan State University Extension bulletin E-433, “2014 Weed Control Guide for Vegetable Crops.”

Preventing field-to-field spread involves inspecting clothes, tires, harvest buckets and anything else that comes out of an infested field before going into the next field.

Puncturevine also has a natural enemy in a stem weevil (Microlarinus lypriformis) and a seed weevil (M. lareynii). Both weevils are 1960s introductions from Italy and can be purchased and applied as a biocontrol agent providing puncturevine levels are high enough to sustain the population.

Farm transition and succession – Why bother?