Reflections on the 40 year anniversary of Michigan Natural Features Inventory

Josh Cohen, an ecologist with Michigan Natural Features Inventory for the past 20 years, reflects on MNFI’s 40 year anniversary.

Forty years is but a blip in ecological time and a mere micro-blink in geological time. The glaciers that shaped the landforms of Michigan receded at a turtle’s pace, traveling approximately 3 to 4 kilometers over the course of forty years. Lake basins formed by the glaciation were gradually filled by peatlands over the course of thousands of years. In forty years, a muskeg slowly grows vertically by accumulating 40 centimeters of peat. Transverse dune ridges fingering their way through expanses of muskegs have seen the passing of dozens of pine cohorts since the glacial recession. The longest-lived trees in Michigan are prepubescent if they make it into their fourth decade.

For a conservation organization, however, forty years seems like an eternity. This year marks the 40 year anniversary of Michigan Natural Features Inventory (MNFI) and our 20 year anniversary as part of Michigan State University Extension. Over four decades, MNFI has functioned as Michigan’s natural heritage program and maintained the state’s database of rare species and high-quality ecosystems. They strived to stay true to the mission of guiding the conservation of Michigan’s biodiversity for current and future generations by providing the highest quality scientific expertise and information. We have come a long way from tracing natural community boundaries with colored pencils on mlyar overlaying topographic maps to generating high-resolution, georeferenced ecosystem maps with drones. Through this evolution, we have depended on Michigan State University Extension, the Michigan Department of Natural Resources, especially the Wildlife Division, NatureServe, and the many long-standing conservation partners for inspiration and organizational support to fulfill our mission. 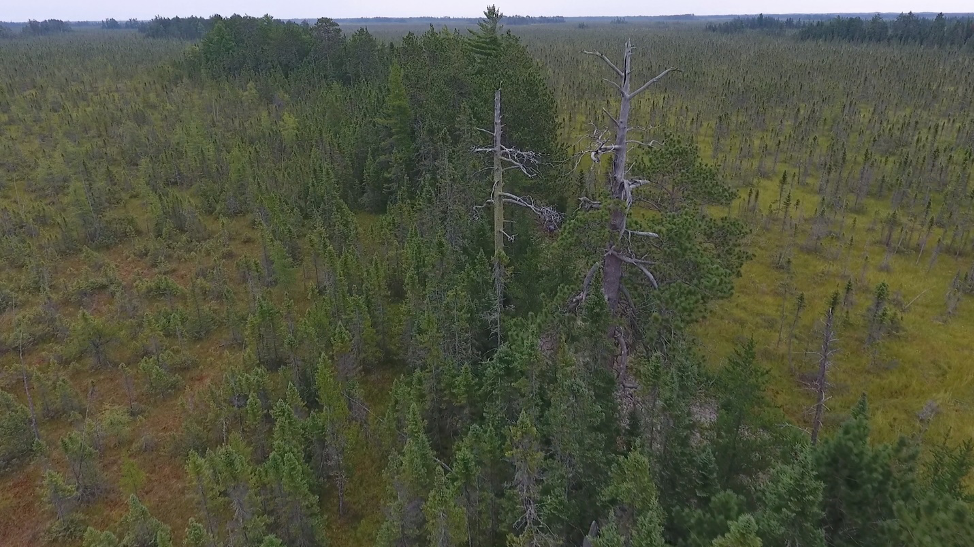 My professional career as an ecologist has spanned half of MNFI’s 40 years. For 20 years I have been blessed to focus on an inspiring and impactful mission and to collaborate with colleagues and partners whom I admire and cherish. On a personal level, immersion during the field season into Michigan’s ecosystems for a quarter of every year for two decades is essential for my physical, emotional and mental well-being. In reflecting on these twenty years, I can’t help but think about the remarkable places I have explored. Take, for example, the discovery of an old-growth red pine (Pinus resinosa) grove on a transverse dune ridge within the largest muskeg in Michigan in the heart of Tahquamenon Falls State Park. This hallowed ground includes a 400-year-old red pine (the oldest red pine I have aged) that was struck by lightning and survived numerous fires. In the fine-textured dune sands along the pine ridge are pockets of fulgurites, rocks that formed from sand fusing together following a lightning strike. I am humbled to be able to explore such amazing places and strive for their conservation and stewardship.

Inevitably, when a significant anniversary comes along it generates contemplation about where we have been, how we got there, and where we want to go. An anniversary that coincides with a global pandemic elicits even deeper reflection. I have been struck by the masses of people flocking to natural areas for solace. I am hopeful that the novel coronavirus will create an urgency in our response to the conditions that likely fostered its spread: climate change and fragmentation driven by an ever-growing human population. Climate change and fragmentation are causing unprecedented degradation of our natural areas. Science builds on the work of those who came before us and advances with the innovation of creative minds. MNFI maintains a strong foundation in natural history expertise and has complemented that knowledge base with talented scientists engaging in cutting-edge conservation, ranging from species distribution modeling to automated classification of species through machine learning. We urgently need to embrace technologies that increase our efficiency in evaluating and prioritizing the most ecologically important places. Over our next forty years, MNFI’s ability to guide the conservation of Michigan’s biodiversity will depend on advancing new technologies, sustaining partnerships and increasing cross-disciplinary collaborations. The places and species that we strive to protect are essential for our well-being and for the well-being of future generations. Our efforts to conserve them matter, now more than ever. Our efforts to conserve them are essential.

Connect with Nature: Join us this fall for “Conservation Talk Tuesdays” webinar series

Working together to improve natural resources