Temperatures averaged near normal with highs from 66 to 90oF and lows from 55 to 70oF. There was an inch or more of precipitation across the area.  On the evening of June 21, a narrow but intense line of thunderstorms went through the area, bringing extensive hail damage to some fields.

No delays due to weather have been reported except during rainy periods.  Most transplanting is complete. Direct seeding continues for short season crops like summer squash, cucumbers and pickles.

Asparagus harvest is complete on most fields and weed control applications are being made.

Peas are being harvested.

Potatoes continue to grow well and all stages of Colorado potato beetles can be found.

Non-tunneled tomatoes are in bloom.  Stakes continue to be placed in fields and plants are being pruned and tied. Peppers and eggplants are putting on new growth.

Zucchini and yellow squash volume is increasing as more tunneled fields come into production. Early, direct-seeded fields will be in bloom by this weekend.

Tunneled cucumbers and cantaloupes are in bloom and harvest will probably begin next week on tunnel-grown cucumbers.  Watermelons are runnering off the plastic and are close to bloom.

Cucumber beetles and Colorado potato beetles continue to be a problem.

Needed precipitation arrived this week on three occasions, varying from a scant half inch to 4.25 inches in some parts of St. Clair County. Overnight (June 21), the eastern side of St. Clair County received over 3 inches of rainfall. Reports from farms in the three counties indicate an average of about 1.5 inches, which was not excessive. High temperatures have varied from 71 to 85°F. Weed pressure is high and being controlled by hand and machine cultivation where needed. There are still some areas on mineral soils where crust from earlier rains are being broken up as operations permit.

European corn borer numbers being monitored in sweet corn averaged 16.7 moths per trap, over double the amount of last week’s count. Although growth has been good, the stands are variable and two to three weeks from tasselling. Tunnels have been removed from all crops.

Field tomatoes are being tied and beginning to produce fruit. A severe case of white mold (sclerotinia spp.), known as “timber rot,” in the south is doing a lot of damage in tunneledtomatoes on one farm. There are a number of management options to consider. 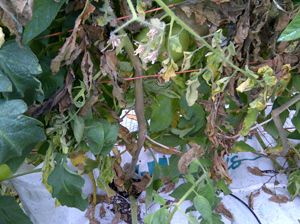 White mold on base of plants. 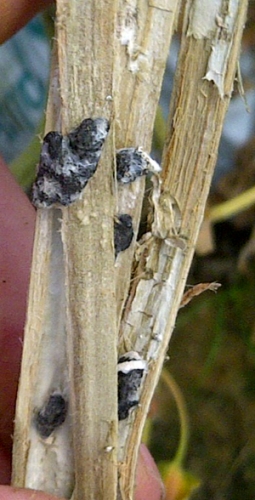 Cole crops were progressing nicely with transplanting continuing. Imported cabbage worm butterflies are flying and laying eggs. Summer squash will begin harvest for retail this week. According to the squash vine borer model onEnviro-weather, these adults will begin to emerge and lay eggs on cucurbits by this weekend.

Successive plantings of snap beans are doing very well. On muck soils, carrots are in the fourth to fifth leaf in development. Romaine lettuce harvest was scheduled to begin today (June 22), but may be delayed due to rain.

The question of the morning has been, “How much rain did you get?” Most locations received 1 to 2 inches last night (June 21) with exceptions on both ends of the range. A few farms near Middleton reported half an inch while growers closer to Greenville reported as much as 3 inches. There are unconfirmed rumors of 5 to 6 inches in some locations.

Potatoes are variable in growth stage.  Some fields are nearly covering the rows wihle others have just emerged. Colorado potato beetle is present in all growth stages on volunteer potatoes. I have not observed any summer adults yet. Flea beetle is also present. Volunteer potatoes that were left uncontrolled are 8 to 14 inches in height. On some farms, the recent heavy rains will necessitate the use of aerial spraying for fungicide application where the use of ground rigs had been planned.

Pickle planting has progressed until the recent rains. No reports of downy mildew.

Dry bean planting has progressed rapidly with many growers finishing before the rains. Beans have emerged quickly with few problem fields.

Light rains have been pretty steady over the last week, but we didn’t catch up our moisture deficit until yesterday evening and overnight (June 21). Hart received 1.43 inches overnight and Ludington received 1.78 inches. Temperatures and humidity have generally not been too far from average over the last week.

Asparagus growers have begun the process of shutting down many fields, but since yields haven’t really dropped yet, some growers are considering picking in to next week as long as they can continue to find a market. Weed pressure is getting pretty high in many fields. Powell pigweed and crabgrass are especially common problems in fields this year. Burndowns such as glyphosate will probably be used in most fields to give the preemergent residual materials a clean slate with which to work.

Common asparagus beetle has been the primary pest during harvest and larvae are reported developing in new fern. Aecial rust lesions are also present in many fields, especially Canadian varieties. We will not have a total tonnage for this year’s harvest for some weeks, but it is already ahead of the miserable total we had in 2010.

Growers have pretty much finished planting late, processing zucchini. Growers of processing broccoli have begun to plant that crop.Vine crops generally look good, but with a few weak spots that needed to be hand re-planted.

In carrots, many growers have finished putting on their last Linuron application. Weed control generally looks good in that crop.

I did not catch any European corn borers or corn earworms in my traps in sweet corn this week. My western bean cutworm traps are also set out, but since it hasn’t been a full week, I haven’t checked those yet. I did send a sweet corn sample to MSU Diagnostic Services yesterday that may be Stewart’s Wilt. Dr. Szendrei and I will let you know results when we have them.