Ask any fishermen where they catch largemouth bass, and they will tell you “in the weeds”. These weeds, also known as aquatic vegetation, often hold greater concentrations of largemouth bass and other fishes. The really good fishermen will even be able to tell you what types of vegetation they think the bass like – perhaps bulrushes, lily pads, coontail or cattails. Fish researchers might really just be fishermen with fancy boats and special tools trying to verify their hunches (hypotheses) using the scientific method.

Which kinds of vegetation do largemouth bass prefer? Do these preferences simply influence where the bass are distributed, or do they also influence the survival and growth of largemouth bass? Nohner set out to test these questions during the summer and fall of 2014 by surveying the largemouth bass populations in 16 Michigan lakes.

Fish were captured at multiple sites on each lake through the use of electrofishing to collect data on fish distributions and abundances (video of an electrofishing survey can be found on Nohner’s website). Nohner’s crew recorded the length and weight of each largemouth bass, along with GPS coordinates to document its location on the lake. To determine the age of the fish, the crew collected scale samples. After stomachs were pumped to collect their gut contents and determine what the fish were eating, the majority of fish were released.

The next step was to map the vegetation, coarse woody habitat, and docks in each lake. Nohner boated around each lake and mapped shallow aquatic vegetation with a GPS. The GPS data were then converted to maps such as the one below. Each map color represents a different type of vegetation, with the light blue representing “vegetation absent”. Overlaid on the map are the locations of Largemouth Bass collected during electrofishing surveys.

On the map, the lack of largemouth bass found in the large, light blue “vegetation absent” patch supports Nohner’s hypothesis (and many fishermen’s hunches) that largemouth bass prefer vegetated areas. The cluster of fish collected at the edge of a vegetation patch indicates that largemouth bass are using aquatic vegetation (especially edges) as they feed. This result is consistent with the discussion in Part 1 of this article and highlights the importance of preserving or restoring natural shorelines along inland lakes.

Nohner anticipates that further data analysis will show that largemouth bass had associations with vegetation, vegetation edges, woody habitat, and docks. In the coming months, he and his crew will be analyzing the data to determine whether these observations are seen consistently across all of the study lakes. 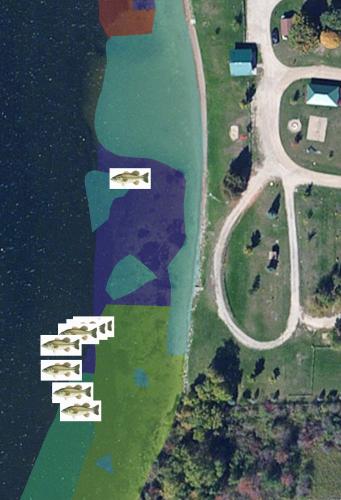 The locations of largemouth bass captured during summer electrofishing surveys on a Michigan lake, superimposed over a map of aquatic vegetation. Similar data across 16 lakes will be used to test hypotheses about the importance of vegetation for Largemouth Bass growth and survival.