ReTain and NAA recommendations for 2013

Harvest management and stop drop are primary reasons growers use ReTain on apples, but there are many other benefits that ReTain can offer.

According to Michigan State University Extension, primary reasons apple growers use ReTain on apples are harvest management and strop drop. However, ReTain offers many other benefits to growers. The ReTain effect will improve storage quality, a major objective of shippers and processors. ReTain stops the production of ethylene in the apple fruit and thus delays maturity, stops drop and lengthens shelf life. The best ReTain recommendation is to apply at full rate split into two sprays at 30 and 14 days before harvest. This “Full Rate Split Application” will give reliable, successful annual ReTain use. Add NAA at 10 ppm with the 14-day before harvest spray for best stop drop.

A major benefit of ReTain includes its stop drop impact on apples. ReTain stops ethylene production, which stops the ethylene ripening effect and thus dropping fruit, a ripening effect. NAA stops drop as well, but by a different action. It delays the formation of the fruit abscission zone. Unfortunately, NAA alone also turns on ethylene, which in turn will ripen fruit; and after the NAA abscission zone effect wears off, fruit drop will be enhanced by the increased ethylene. ReTain, however, will eliminate the NAA-induced ethylene. Thus, using the combination of ReTain plus NAA provides the best of both worlds, improved stop drop from both materials and ReTain’s control of the NAA induced ethylene ripening.

ReTain also reduces watercore, greasiness, cracking and improves fruit size. More research on lower rates of ReTain plus NAA needs to be done. Overall, ReTain plus NAA has performed well in the past four years of trials on all varieties.

ReTain is dose dependent, time dependent and variety dependent. ReTain is very effective at controlling ethylene production in apples. Even low rates can eliminate ethylene production for some time. The standard full rate is 333 gallons per acre (1 pouch per acre) applied at 30 DBH (Days Before Harvest). Full rate and even low rates provide improvements of other fruit problems such as cracking, greasiness and watercore. ReTain can be applied in split applications or for maximum maturity delay, apply up to two full rates of ReTain. Additional stop drop control will occur when ReTain is combined with NAA at 14 DBH.

McIntosh is a special case variety because it is a high producer of internal ethylene and has considerable variation in ripening. McIntosh is notorious for a mix of maturity on the tree and are prone to heavy fruit drop. Some apples on the same tree mature early and produce significant ethylene while many others are still green. McIntosh starts producing ethylene early up to three weeks before harvest in some fruits and thus, drop in some years can start early. This makes it important to spray ReTain early (30 DBH) to make sure the successfully control this early producing ethylene tending McIntosh variety. This is particularly important during those years when summer heat or drought stress is above normal. High summer stress tends to elevate ethylene early and runaway fruit drop may occur. 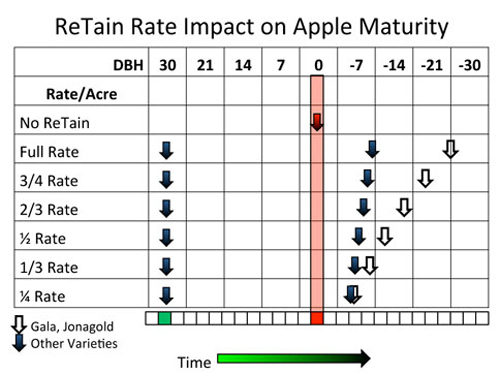 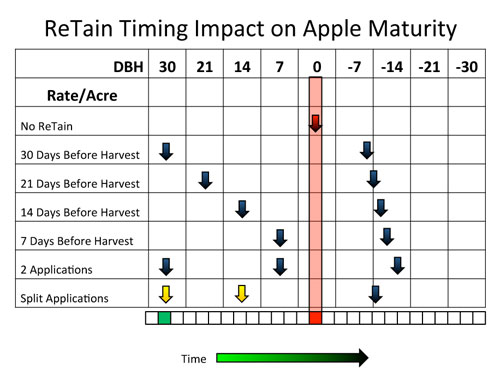 ReTain is dose dependent (Fig. 1). The greater the rate of ReTain, the greater delay in maturity and the longer the ReTain will have effect. The gold standard (standard recommendation) use of ReTain is to apply it 30 DBH at full rate, 333 gallons per cre (1 pouch per acre). This early application will provide maximum ethylene control, maximum maturity delay and maximum stop drop protection and will delay harvest seven to 10 days. However, this 30 DBH application will also wear off earlier than later applications of the same rate. Using a reduced rate 30 DBH (Fig. 1) will provide similar benefits, but wear off earlier – that is, half rate will provide only four to seven days delay in maturity instead of the seven to 10 day delay of the full rate. A 30 DBH full rate of ReTain will also have maximum impact on red color development. Gala and Jonagold maturity will be delayed much longer than most other varieties (Fig. 1).

ReTain is time dependent. Early applications (30 DBH) will have a greater impact on the fruit then later applications (Fig. 2). Applying ReTain closer to harvest will have less impact on reduced fruit color and will extend the days to harvest. Also, fruit may start dropping before a late application of ReTain can gain control of internal ethylene. Varieties prone to drop should receive a ReTain application no later than 14 DBH, but 21 DBH would be a better timing, especially on drop prone varieties. First ReTain applications made as late as seven DBH will increase the risk of poor stop drop control but lessen impact on fruit quality (red color) and extend harvest maturity, but drop may still be a challenge.

ReTain can be applied as a split treatment for example, half rate 30 DBH plus one-quarter rate 14 DBH (Fig. 2). This treatment is always one of the best treatments for controlling drop, managing harvest and achieving excellent fruit quality. Split applications of ReTain are always at least as good as or better than a single application.

ReTain will improve fruit quality (Figs. 6-7). ReTain is a very effective material even at low rates. Fruit cracking is a bothersome problem with some varieties. Lower rates such as one-quarter to one-third rate will control cracking plus provide other fruit quality control such as watercore and greasiness.

ReTain will delay the development of red color especially if applied early (30 DBH). Delaying ReTain application until fruit are closer to harvest (10 to 7 DBH) will reduce the impact on red color, but may also have less impact on stop drop. Fruit treated with ReTain will recover the red color levels of untreated trees, but growers need to be patient and wait for fruit to achieve full maturity. Harvesting fruit in a premature condition will have lesser red color. 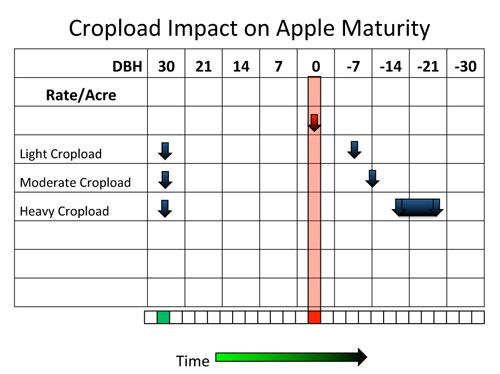 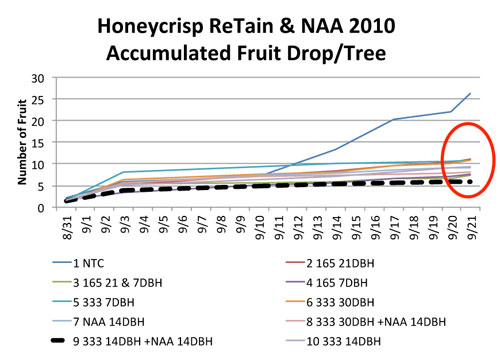 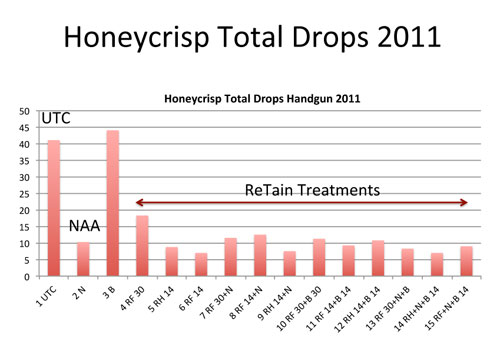 Apple fruit growth will slow in when ReTain is applied. ReTain, however, will hold fruit on the trees and can increase fruit size in some years. Usually ReTain-treated fruit size is larger or not different than untreated trees when harvested at proper maturity.

In those years of stressful summer conditions (hot and dry), fruit will start ripening early and fruit will drop early. In those type years apply ReTain earlier and at higher rates. ReTain is very effective at stopping drop if applied early enough to provide control before drop commences. ReTain plus NAA will provide even better stop drop. Many years all ReTain rates provide excellent stop drop control, but the best treatments are split applications and NAA combinations (Figs. 4-5). 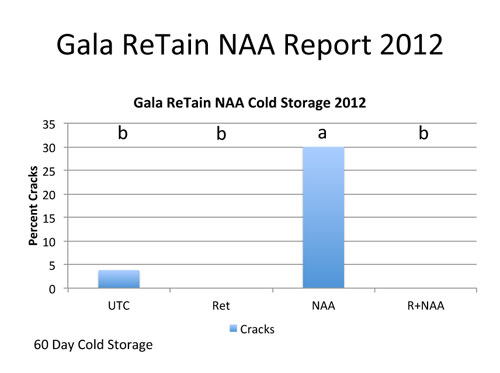 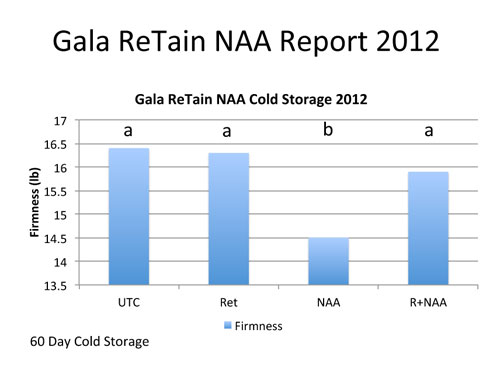 Table 1 lists 2013 recommendations for the use of ReTain and NAA and for certain sensitive varieties. Generally, to delay maturity, use early applications and multiple full rates. When summers are stressful (hot and dry), use early applications and add NAA. On McIntosh that are prone to drop, use half rate ReTain plus NAA twice at 30 DBH and 14 DBH. Gala and Jonagold are very sensitive to ReTain, thus half rate will work well. Two one-quarter rates will work well and add NAA as needed. Honeycrisp responds nicely to one-quarter rate ReTain plus NAA 14 to 21 DBH. All other varieties respond well to half to two-thirds rate ReTain plus NAA 14 to 21 DBH. Full rates will work well also.

A Pocket Guide for IPM Scouting in Michigan Apples (E2720)

Apple Cultivars for Production of Hard Cider in Michigan (E3364)