Putting back the (Little) Rapids: River restoration in the Saint Marys Area of Concern

Visit the Saint Marys River today in the bi-national cities of Sault Ste. Marie, and you will experience a vibrant area based largely around the locks structures that allow large ships to pass between Canada and the United States on lakes Superior and Huron. These impressive structures support both an important commercial shipping industry as well as a thriving tourism industry. However, travel back in time prior to the 1600s and the Saint Marys River looked vastly different. Pounding rapids, coastal wetlands, and rustic islands created wildlife habitat for a large variety of species. In particular, the rapids of the Saint Marys provided spawning habitat for native fish species including lake whitefish and lake sturgeon. This thriving fishery was used as tribal fishing grounds for thousands of years by Native Americans and later attracted fur traders and European settlers to the area. 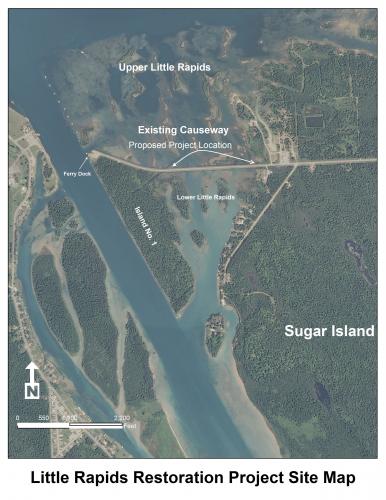 Since the industrial development of Sault Ste. Marie, portions of the river closest to the city have seen large amounts of habitat degradation. While impressive wetlands and riparian habitat still exist downstream of the cities, the area of the river nearest to them has had severe habitat degradation along with contamination from nearby industry, which have resulted in it receiving an international designation as an Area of Concern. Areas of Concern (AOCs) are designated by the bi-national Great Lakes Water Quality Agreement as areas where “… impairment of beneficial uses has occurred as a result of human activities.” AOCs designated through this agreement now receive special attention through state, provincial, tribal and federal governments and funding through the  Great Lakes Restoration Initiative. The goal of this funding is to remove contaminants and restore habitat so the areas can be “delisted” and can once again be enjoyed by humans and wildlife alike.

Throughout the last 30 years, a number of activities have improved the habitat and water quality within the Saint Marys AOC, and around 3 years ago a collaborative effort began to restore a section of the rapids. The bi-national public advisory committee, which provides input on the cleanup and delisting process for the AOC, partnered with many local agencies to initiate an effort to restore fast flowing rapids to a section of the river near Sugar Island known as the “Little Rapids.” More than a half-century ago, a road and berm were created near the island’s ferry dock that had only two small culverts, restricting flow to a slow trickle. These culverts were beginning to deteriorate and the committee saw an opportunity to replace the aging structure with a bridge and reconnect the natural fast flow that once existed. Given that only 10 percent of the original rapids remain within this stretch of the Saint Marys River, restoring them could have a large, positive impact.

Over the last two years, funds from the Great Lakes Restoration Initiative were used to plan the design and construction, perform scientific studies to assure the process would result in a positive outcome, and over the course of summer 2016 the construction was completed. Many agencies such as the Eastern Upper Peninsula Regional Planning and Development Commission and Lake Superior State University (LSSU) Aquatic Research Lab assisted with public outreach and scientific studies to ensure the success of the project.

On a recent visit to the site, Dr. Ashley Moerke of LSSU commented on how impressive it was that the riverbed was already returning to its original state. Where silt and sand once existed, there is now lush cobble and gravel riverbeds scoured clean by the fast moving water. Moerke notes that in areas of the river that retain fast flowing rapids the macroinvertebrate life is far more diverse and rich than in degraded areas such as the Little Rapids site prior to restoration. By restoring the rapids, not only will spawning habitat be created for native fish, but increased macroinvertebrate populations could create higher quality food sources for a variety of fish species. Wading and small craft fishing opportunities for species such as walleye, whitefish, trout and salmon are likely a reality thanks to the Little Rapids restoration project. Prior to this project there were no accessible rapids for fishing on the U.S. side of the Saint Marys.

The Little Rapids restoration project is a great example of how multiple organizations can partner together to improve habitat for humans and wildlife alike within the Great Lakes region. The restoration of these rapids has the potential to improve fish populations, fishing opportunities, and ultimately contribute towards the delisting of the Saint Mary’s River as an international AOC.