This week I found a small red pine seedling covered with the orange blisters caused by pine needle rust. On young trees this can slow the growth and cause unsightly foliage. This rust can also be a problem on Scotch pine. Pine needle rust needs both pine and either golden rod or asters to complete its one-year life cycle. The spores that are produced on pine do not infect pine but will infect goldenrod or aster, and only spores produced on these alternate hosts can infect pine. Without the alternate host, the fungus will not be able to complete its life cycle. This is why we usually don’t see a problem in Christmas tree fields because growers are controlling the weeds. To control this rust, you should remove the golden rod or aster by mowing or using an herbicide before August.

On Scotch pine, gall rust can be found on branches and on the main trunk. Infection begins when spores infect green, succulent stems during wet springs. Symptoms rarely appear the year of infection, but galls on the twigs near the point of infection appear in subsequent years. The conspicuous, perennial, round-stem galls can be one to four inches in size. The galls are now beginning to turn yellow/orange due to the release of spores. This rust rarely kills mature Christmas trees, but it disfigures and severely reduces their quality. Pruning out these galls before they produce spores may help to reduce the spread of this rust. 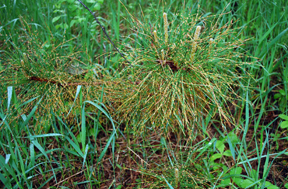 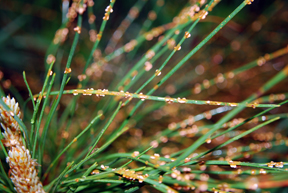 Real Christmas trees: Which one is right for you?