Scout for stripe rust and other wheat leaf diseases now

Much of what successful wheat growers do during May is protect the crop during its early reproductive stages from crop pests. One of the largest threats to productivity is foliar diseases. Although genetic resistance usually does the heavy work, particular diseases readily break through this defense where conditions are favorable and resistance is not particularly strong.

In Michigan, the most common early-season foliar diseases include powdery mildew and Septoria leaf spot (see photos below). These diseases has been evident as early as last fall in some fields, but weather conditions have allowed only modest development to date. In early June, other foliar diseases may appear, including Stagonospora leaf blotch and leaf rust.

This 2016 season, a relatively new rust disease called stripe rust is of special interest. This is because the pathogen can be particularly aggressive with the potential of robbing at least a third of the crop in severe cases. It was found at multiple locations in Michigan during the first few days in May – a month earlier than in past years – giving it extra time to develop and disseminate spores. About one-third of Michigan varieties have limited resistance against this disease. 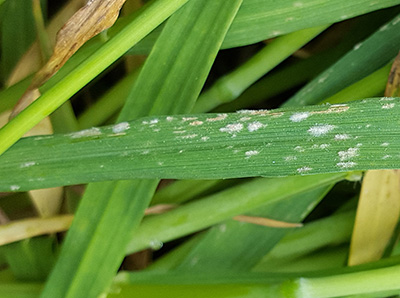 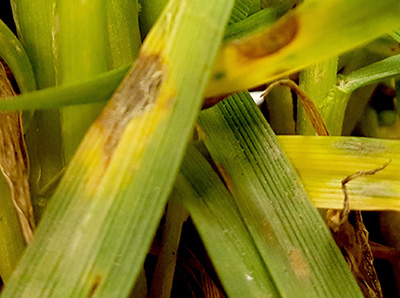 Of the soft white varieties tested in the 2015 Michigan State Wheat Performance Trials, Ambassador, Aubrey, 9242W, Linebacker and AC Mountain were especially susceptible to stripe rust, and Ava, P25W43 and Jupiter were moderately susceptible. Among soft red varieties, the most susceptible ones included Shirley, Red Ruby, Sienna, Emmit, DF 55R and DF 45R. The moderately susceptible red varieties included Hopewell, Red Dragon and DF 75. However, this is not an exhaustive list, so growers would do well to check with their seed company if the disease is found. Additionally, even moderately resistant varieties should be monitored closely in case the resistance is overwhelmed by stripe rust.

Growers should be prepared to employ a fungicide where stripe rust is found on susceptible varieties. A list of recommended fungicides can be found in Fungicide Efficacy for Control of Wheat Diseases, developed by Michigan State University Extension. In this table, readers should note how late in the crop’s development a fungicide is allowed to be used. Where the disease is found just prior to a scheduled application of Caramba or Prosaro at flowering, no further fungicide product or application is necessary.

The multi-state North Central Regional Committee on Management of Small Grain Diseases (NCERA-184) has developed the following information on fungicide efficacy for control of certain foliar diseases of wheat in the U.S. (revised March 30, 2016). Efficacy ratings for each fungicide listed were determined by field testing over multiple years and locations. Efficacy is determined by direct comparisons among products in field tests. The products are used in a manner consistent with label instructions. This table includes most widely marketed products. It is not intended to be a list of all labeled fungicide products.

2 Product efficacy may be reduced in areas with fungal populations that are resistant to strobilurin fungicides.

3Efficacy may be significantly reduced if solo strobilurin products are applied after stripe rust infection has occurred.