Black walnuts are not the only edible nut meats found in southern Michigan.

Now that the cooler weather has set in for good, the baking season is also well under way. Pecans are a popular ingredient in many types of bread, cookies and other treats, but it turns out that the woods in our own back yards have an excellent substitute. The nuts from the shagbark hickory (Carya ovata) offer a tasty nut meat that can be found in most areas across the southern half of Michigan’s Lower Peninsula. 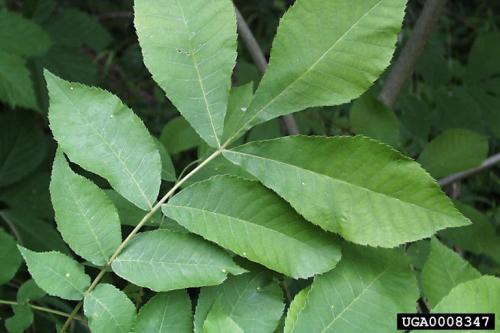 Photo: Hickory leaves have wider leaflets near the top of the leaf. Photo by Paul Wray, Iowa State University, Bugwood.org

Even now that most of the trees have shed their leaves, the shagbark hickory is easy to identify. Just as its common name suggests, the bark of this species is quite distinctive. At maturity, long, narrow strips of bark on the trunk begin to detach and bend outwards, giving the entire tree that characteristic shaggy look. Although there are other hickory species that grow in this region (e.g., bitternut hickory, Carya cordiformis, and pignut hickory, Carya glabra), no other has that type of bark arrangement. Michigan State University Extension publishes a simple booklet, Identifying Trees of Michigan, which helps identify hickories and other native Michigan species. During the growing season, all hickories can be identified by their rather large, compound leaves containing 5-7 leaflets. They can be distinguished from other tree species with similar compound arrangements such as the ashes by looking at the relative size of the leaflets. The leaflets on hickories are much larger near the tip of the leaf, while the smaller leaflets are found nearer where the leaf attaches to the branch. 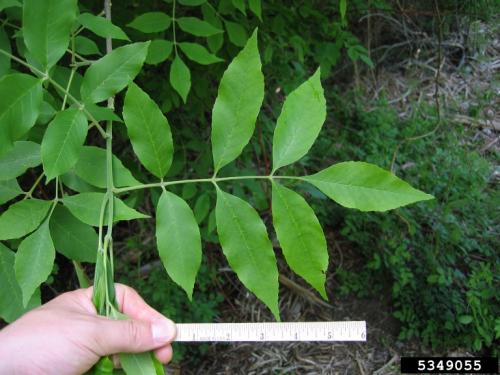 Photo: The compound leaves of ash trees have leaflets that are narrower and similar in size on each leaf. Photo by Keith Kanoti, Maine Forest Service, Bugwood.org

There is no need to try to harvest shagbark hickory nuts right off the tree—they are only ripe after they have fallen to the ground. The next challenge is to collect them before the squirrels do! These nuts are covered with a thick husk that readily falls off in four quarters after they fall to the ground. If the husk doesn’t come off the nut easily, let the nut dry out for a week or so and try again. The nuts themselves are cream-colored, oblong and about 1-1.5 inches long. The nut shell itself is very hard, but not as hard as black walnuts. And unlike black walnuts, they do not need to be cured before extracting the nut meat. Gently tapping the nut with a hammer to extract the meat is likely to be more effective than using a typical nut cracker. Use the hickory nuts in place of pecans in any recipe. 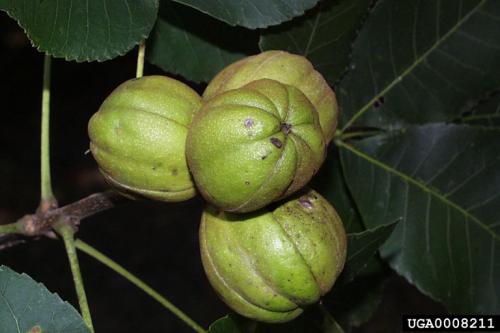 Photo: Shagbark hickory nuts have thick husks that will pop off in quarter sections once they have ripened and dropped to the ground. Photo by Paul Wray, Iowa State University, Bugwood.org

Note: The nuts from other native hickories like pignut or bitternut are extremely bitter. Be sure you are collecting nuts from shagbarks to spare yourself a lot of wasted time and effort! The easiest way to know if you have a non-shagbark hickory nut is by looking at the nut husk. Only shagbarks have thick husks, while others have thinner, more leathery husks that are hard to separate from the nut itself. The Wisconsin State Herbarium has additional photos of bitternut hickory characteristics.

The shagbark hickory is an important species that can be found in a range of settings, from dry uplands (usually mixed with black or pin oaks) to richer, wetter areas. Besides serving as an important food source for small mammals, the wood is an excellent source of firewood. Hickories of any species are one of the best types of fuelwood, generating around 16 million BTUs per cord* (about 20 percent moisture content on an oven-dry basis). Additionally, the fragrance of the wood itself makes it ideal for smoking meats. All in all, shagbark hickories are a culinary delight for humans and wildlife alike.