Sheath mites can cause misshaped needles on white pine. Here are some tips on scouting for them.

The biology of white pine sheath mite, Setoptus spp (Acari: Eriophyidae), involves two distinctly different phases of activity. Now as the candles are elongating, mites inhabit the needle sheath and feed on the elongating needles. This causes the needles and the new growth to be stunted or curled. The mites feed openly on mature needles, causing them to turn yellow and later turn brown, die and drop off, leaving naked branch tips. This damage can mimic other problems such as environmental or nutritional issues and herbicide injury, and needs to be taken into consideration when diagnosing the problem.

To check if you are having a problem with these tiny mites, look inside the needle sheath at the base of the needles. You may need to pull the needles apart in order to see the mites. They are very small and you will need a hand lens (15 to 20X) or microscope to see them. They are creamy white and about 1/125 of an inch (0.2 mm) in length. Their bodies gradually taper toward the end and are somewhat shaped like a carrot.

Most trees usually support small populations that cause no visible damage. Flare-ups often occur on stressed trees or after applications of broad spectrum insecticides that kill mite predators. 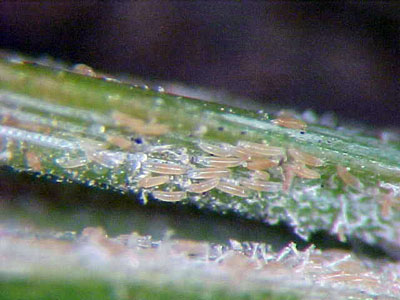 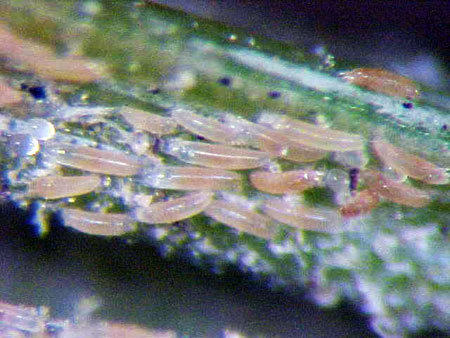