Should you spray for eriophyid mites on spruce?

Eriophyid mites are being found in Colorado Blue and Black Hills spruce. Here’s advice for scouting and deciding whether to spray.

Immature and adult eriophyid mites suck on the sap in the needle. This feeding can discolor and distort foliage of many conifer species. Currently, we are finding these mites on Colorado Blue and Black Hills spruce, but they can cause damage in other conifers.

Eriophyid mites are also known as rust mites. This group of mites is very, very small and are often difficult to see with a hand lens. Eriophyid mites are very tiny, and have a carrot-shaped body with only four legs on one end. They can be clear, tan, cream or orange. In order to see them, you need at least a 15x hand lens. Even then, the insects are barely noticeable. When many mites are present, their damage gives the needle a dusty, bronze to rust-colored appearance. 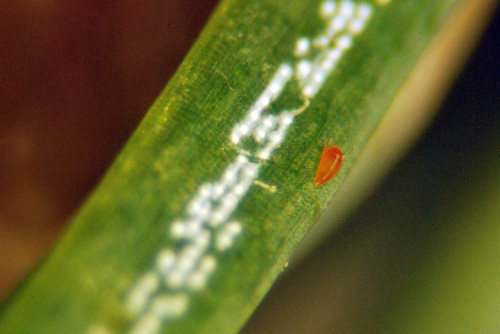 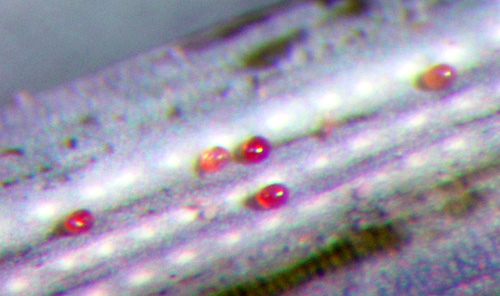 Close up of eriophyid mite eggs on a spruce needle.

Growers often ask at what levels they should consider spraying. One threshold developed by North Carolina State University recommends for hemlock rust mite on Fraser fir, white pine and hemlock. To scout for these insects, zigzag through your fields and randomly pick a tree every 10 to 15 trees. Typically, we find these mites more on the current year’s growth. Keep track of the percentage of shoots that have mites, as well as the greatest number of mites on an individual needle, adding the number on both the upper and lower surface of the needle.

Two criteria to determine if a pesticide is necessary

Keep scouting weekly until you see mite numbers begin to decrease. Products that are used to control spider mites may not control eriophyid mites that are biologically different. Successfully treating for eriophyid mites requires using an insecticide or miticide effective against eriophyid mites, such as Avid (abamectin), Sevin (carbaryl) or Envidor (spirodiclofen). Remember to continue to scout trees even after treating trees to determine if mites were killed.

Farmers and homeowners should be prepared for spring flooding