Recent precipitation has improved the crop outlook, but diligent pest scouting continues to be important as crops approach maturity.

Rainfall in the past two weeks has generally alleviated visible drought stress symptoms in crops throughout the area (Figure 1). Prior to these rainfall events, sites in the region were between 10 and 60 percent below the five-year average (see the southwest Michigan field crop regional report from Aug. 16), whereas these same sites currently range from 20 percent below to 40 percent above that average (Figure 2). Localized flooding was common, but floodwaters abated within three to five days in most cases, so we aren’t expecting much crop damage from these rains. Straight-line winds and tornadoes from Van Buren to Ionia counties from Aug. 20-23 did cause localized damage, but otherwise weather has been favorable for moving crops along.

The 6-10 day outlook from the National Weather Service forecasts a 50-60 percent chance of warmer than normal and a 30-40 percent chance of wetter than normal weather. Highs are predicted to be in the upper 70s to lower 80s and the lows in the upper 50s to mid-60s—near-optimal conditions for grain fill in corn and soybean and for forage growth. Growing degree-days (86-50 degrees Fahrenheit) in the region since mid-May range from 1,881 to 2,214 with an additional 150-170 forecast for the rest of the month (Figure 3). 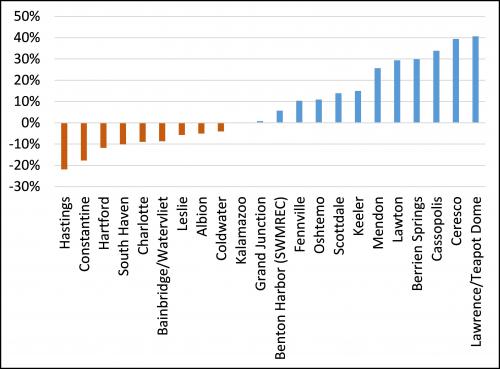 Figure 2. Rainfall from May 15 to Aug. 25, 2016 compared with the most recent five-year average for several Enviro-weather sites in south central and southwest Michigan. 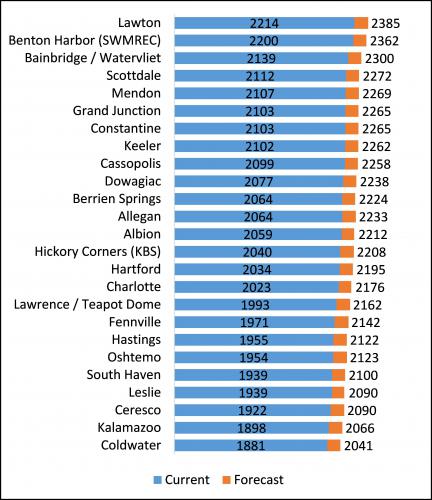 Figure 3. Growing degree-day (86-50 for corn) for several Enviro-weather sites in south central and southwest Michigan from May 15 through Aug. 25 (current) and the forecast through Aug. 31, 2016.

Field corn in Michigan is rated as 56 percent good or excellent with an additional 29 percent rated as fair according to the most recent USDA Crop Progress Report for the week ending Aug. 21. We understand the variability in these numbers because we have significant damage due to drought in dryland production across southern Michigan. According to the same source, 67 percent has reached the dough stage (R4) and only 15 percent has reached the dent stage (R5). However, fields we have visited in southern counties that were planted in mid-May were already in early dent. Corn looks healthy, although much of the yield losses due to dry conditions during much of June and July are unlikely to be reversed with recent rains.

Western bean cutworm damage has been greater than in the past few years even in corn with traits designed to control above-ground Lepidopteran. (See “Check corn now for western bean cutworm damage before harvest” by MSU entomologist Christina DiFonzo for more details.) Fall armyworm has been reported by MSU Extension’s Marissa Schuh in southeast Michigan and other parts of the state (see “Fall armyworm has arrived in Michigan corn”).

Between these two pests and corn earworm, which has also been seen in the area, scouting is recommended. It is also important to let your seed dealer know if you see feeding on hybrids that are supposed to have a level of protection against these pests.

Seed corn defoliant sprays were beginning to be applied about two weeks ago. Harvest should be underway soon, if not right now.

Soybean setting pods reached 87 percent in Michigan according to USDA’s Crop Progress Report, although all fields we have visited had reached full pod stage (R4) and most had reached beginning seed (R5). As with corn, soybean stands in the region look good. White mold is not likely to be a major issue this year with the hot and dry conditions earlier in the season, even with recent abundant rains. However, those with irrigated fields should continue scouting to determine disease pressure. Although there are no control options for white mold at this point, knowing disease occurrence will help in making variety and management decisions in the coming years.

We are also heading into the soybean scouting sweet spot over the next couple of weeks. This is the time before mature soybean plants begin to turn and drop leaves. Areas that turn early are often an indicator of places where the plants have been under stress. These are great places to visit in the fields to look for trouble, such as sudden death syndrome and soybean cyst nematodes. While we can’t do anything about them this year, understanding the root cause of the stress can help us to make management decisions, such as selecting resistant varieties and when we rotate back to soybeans in the field.

While we have been receiving plenty of rain as of late, we should watch soil moisture levels in soybean fields to continue to ensure that adequate moisture is available through late pod filling. Soil moisture can insure that soybeans size to the greatest extent possible.

Potato late blight – the disease that destroyed the Irish potato crops in the 1840s – continues to slowly spread in southwest Michigan and northern Indiana. Potato vines desiccation is underway to prepare them for storage harvest, which will start mid-September. “Green dig” or “fresh crop” potato harvest started in early August and will continue into October. (Thanks to Karl Ritchie with Walther Farms for the update.)

Hay fields that had been adequately fertilized following previous cuttings have responded well to recent rains, and fourth cutting should be very good this year.