While some areas in the southwest escaped heavy rainfall over the last week, on average the region has received its fair share of precipitation.

Strong storms on June 12 created a path of destruction through central to northeastern Van Buren County. Most Enviro-weather stations are 1 to 1.5 inches above the “normal” precipitation level for both the last two and four week periods. Warm and wet conditions over last weekend have given way to fair days and bright sunshine. Mother Nature is expected to turn up the heat over the upcoming weekend and into the final week of June.

The 6-10 and 8-14 day outlooks predict near normal temperatures here, with a large dome of heat building to the west that will eventually push into the area by the end of the period. Precipitation is expected to be slightly above normal in the 6-10 day outlook, and return to normal in the 8-14 day period.

Base 50 growing season GDD accumulation in Three Rivers, Mich., since May 1 is 721, about 30 GDDs behind last year’s record pace and about four “normal” days ahead of the long-term average for this period. We normally accumulate around 17.5 GDDs per day this next week, and increase to 19.5 GDDs over the next five day period.

Corn growth this year is all over the board. We have commercial corn fields that are at V8 (30-plus inches in height) planted right next to fields that are V2 (4 inches in height). The one common denominator at this point is that all corn is growing rapidly right now. Probably an average growth stage across the region is V5-V6. Sidedress applications of nitrogen have been fast and furious with the return of more trafficable field conditions. 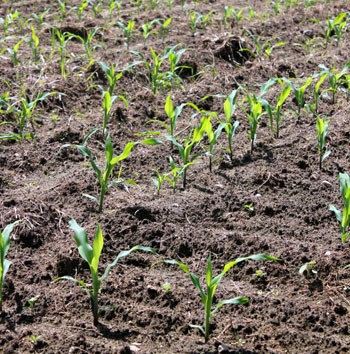 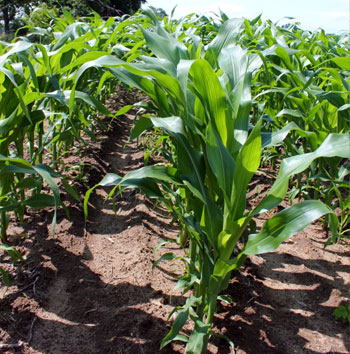 Insects. No news is often good news on the insect front. Not much activity in fields I have looked at. Armyworm feeding seems to be very low. It will pay to keep an eye on later-planted fields of corn for trouble, but the early fields have probably progressed out of the danger zone from these pests. We are approaching the time when we may begin to see rootworm larval feeding begin. Growers should also keep an eye out for deteriorating stand evenness, a sign that white grub or corn rootworm root feeding may be occurring.

Early planted soybeans continue to look good. Most advanced fields are V3-V4 and may be approaching flowering. Bean leaf beetle activity is increasing, but levels appear to be low at this time. Folks are still planting rain-delayed soybeans in some locations. Be careful not to let weeds get too tall for post-emergence sprays to control. A lot of herbicide is going on soybeans with the drier weather.

Be on the lookout for soybean fields that begin to turn yellow over the next several weeks. Soybean cyst nematodes are one potential culprit, but there are others as well. Soybean cyst nematode cysts are being found in high numbers in heavily infested fields now. We also have seen early onset of soybean sudden death syndrome in fields in St. Joseph and Van Buren counties. Finally, there have been reports of soybean aphids in low numbers in fields in Branch and Calhoun counties. One scouting trick you may want to add to your soybean scouting procedure is to look for ant activity on soybean plants. Ants often “farm” aphids. It is often easier to see ants on the top of soybean leaves in small plants than to see aphids on the bottom side of the leaves. 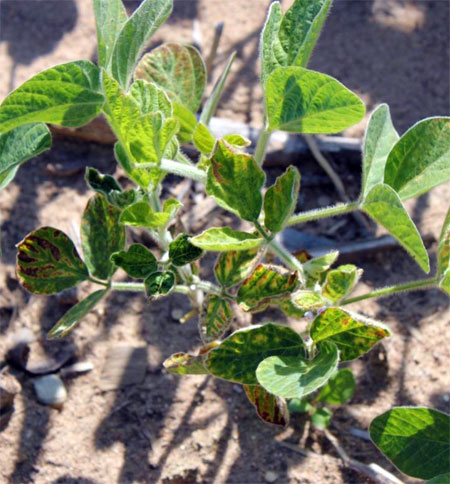 Seed corn planting is moving towards completion. Early planted fields look good with the exception of some lower areas in fields. There are some weed control issues in some fields, especially where growers have been pre-occupied with getting the proper GDD delay when planting male rows.

There are lots of options for insecticides to control the early instar larvae. If insecticides are used, they should be applied to get the maximum amount of active ingredient into the whole of the plant. Check with your seed company agronomist for threshold levels for European corn borer treatment in seed corn. For more information, visit the University of Illinois’ European Corn Borer Insect Fact Sheet.

Michigan State University Extension field crops pathologist Martin Chilvers walked several fields with me following the IPM Breakfast Meeting on Tuesday, June 18. We were able to find several seed corn seedlings that exhibited root rot in fields in the Constantine Prairie. Some fields may have had as much as 8 percent infection rate in the female inbreeds. It is not clear what pathogens were infecting the seedlings.

The area’s wheat crop is beginning to turn. It has been well noted that the overall height of the crop is shorter than normal across southwest Michigan, which may have served us well with the thunderstorm activity we have experienced recently. The heads look to be normally sized and the grain is developing well. There does not appear to be negative impacts from the cold weather we saw going into the flowering in fields I have walked. With the cold spring, there was concern that second crop soybeans would not be an option following wheat. The warm-up in May has reduced some of these concerns, and a few growers are considering the option as wheat nears the harvest window.

Alfalfa harvest has been helped by the stretch of warm and dry weather this week. Potato leafhopper numbers will likely be on the increase and growers should be scouting for potato leafhoppers in the early regrowth to prevent small alfalfa from “hopper burn.”

Registration is $35 at the door.

Next IPM Breakfast Meeting – June 25 at 7 a.m.
Amish Table Restaurant in Centreville, Mich., located east of the fairgrounds on M-86.

There is no cost for this program.