Precipitation this past week has alleviated the soil moisture deficit prevalent in the region, but scouting for crop pests needs to move up on your priority list.

Unlike other areas of Michigan that have received unwanted press this summer, the southwest and south central region has welcomed rains this past week. Figure 1 shows rainfall totals for Michigan State University Enviroweather sites for the week. Most of that rain has been distributed fairly evenly throughout the week rather than coming in “gully washer” events. This has brought relief for moisture-stressed crops in rainfed areas and to farmers who have been busy managing irrigation through numerous pivots.

Temperatures have continued to be above normal, and most of the region is three to seven days ahead with regards to heat units (Figure 2). The 6-10 day outlook by the National Weather Service (Figure 3) shows this trend will continue, and precipitation is predicted to be near normal. The 8–14 day outlook is similar with a slightly lower chance of above-normal temperatures and a slightly higher chance of above-normal precipitation. 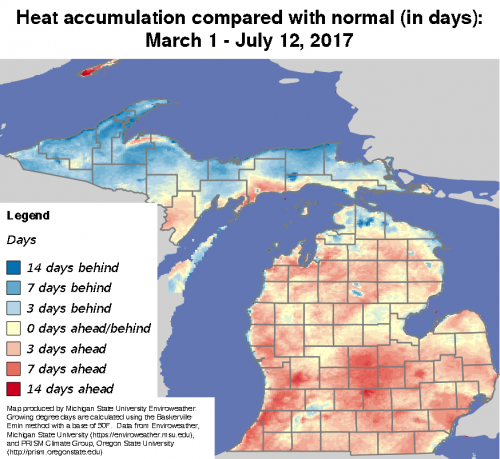 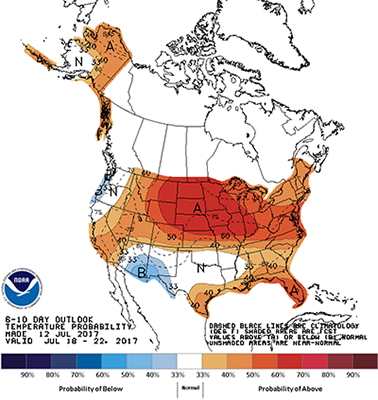 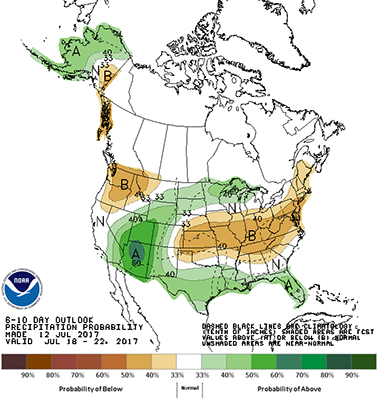 Figure 3. The 6-10 day outlook for temperature (left) and precipitation (right) from the National Weather Service.

Corn in many earlier-planted fields has begun to tassel (VT), but later-planted fields are still in the mid- to late-vegetative stages. According to USDA’s Crop Progress Report as of July 10, 2017, only 2 percent of Michigan corn has reached silking (R1). Seed corn fields follow a similar trend with detasseling crews out in some fields, but a couple of weeks away from others.

Water use for V12 field corn is 1.3 inches per week, and tasseling corn will need 120 percent of potential evapotranspiration. See Michigan State University Extension irrigation educator Lyndon Kelley’s excellent articles on crop water use for late June and crop water use for mid-July, depending on what stage your crop is in.

Several good resources can be found online (see list below) about the correlation between growing degree-days (GDD) and corn development. Cumulative GDDs (base 50/maximum 86) for MSU Enviroweather sites in the region are found in Figure 4. 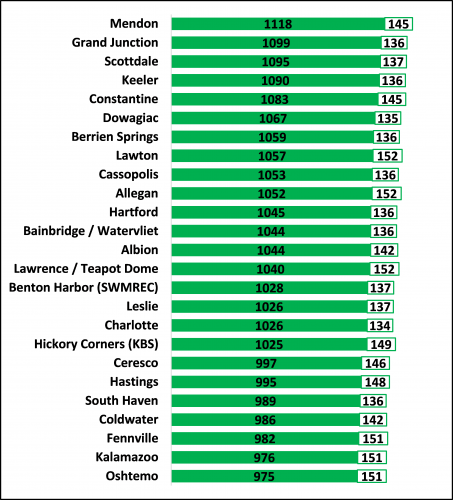 Soybean fields are well into flowering stages (R1–R2) with some beginning pod set (R3) in more advanced fields. Reports have yet to come in about white mold problems, but in fields that have achieved canopy closure, especially in areas that have been wet all week, farmers need to be on the lookout for signs in fields prone to white mold.

Wheat fields are 10 percent harvested in Michigan according to the USDA report, which is not far from what we’re seeing in our region. MSU Extension cover crop specialist Erin Hill reminds growers of the considerations when selecting cover crops following winter wheat.

We have been trapping for western bean cutworm for three weeks in the region (Figure 5), and counts continue to ramp up at most sites. The females lay egg masses fairly high in the canopy, preferring plants that are just starting to tassel or are tasseling. 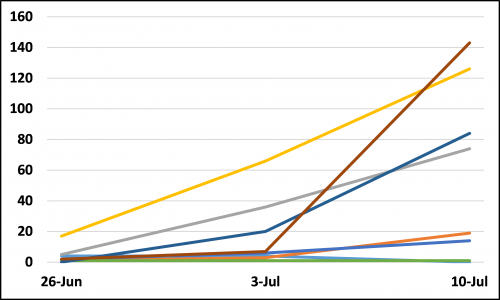 According to MSU Extension entomology specialist Christina DiFonzo, when scouting for western bean cutworm, count 20 plants at five different locations. Since the eggs hatch (Figure 6) in a week or so, they should keep a running total of how many masses they see each week. The treatment threshold is five percent of plants with egg masses.

A common pyrethroid (the “-thrins”) insecticide such as Warrior (lambda-cyhalothrin) will control western bean cutworm larvae and typically provide 10–14 days of residual activity. Once the larvae have “fattened up” on pollen packets in the tassels and made their way back down the plant and into the ear, control is all but impossible. 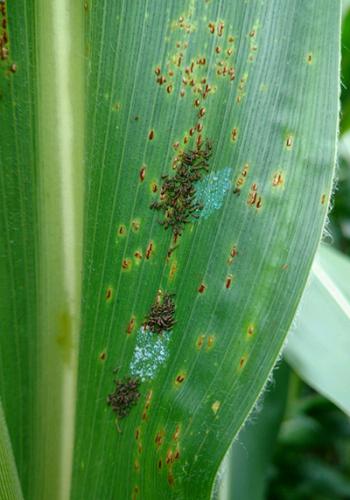 Asiatic garden beetle white grubs have caused lots of stand unevenness this year. The grubs pupated around the July 4, ending root feeding damage. The adults have emerged and are now feeding on ornamentals and other plant species. The challenge is that the adults will mate and the females will lay eggs soon in soybean fields. Rotated corn will then again be susceptible to root feeding damage next spring.

Ohio State University field crops entomologist Kelley Tilmon shared with us that Asiatic garden beetles seemed to be strongly drawn to feeding on the roots of horseweed (marestail) plants. We found the same thing in southwest Michigan—see Figures 7 and 8 (wouldn’t it be nice if they only ate marestail?!).

It is unclear how beetles decide which soybean field to lay eggs in. The history of this pest is that one field would have no damage, while another close by would have lots of damage. Walk your soybean fields over the next couple of weeks to see if you find high numbers of Asiatic garden beetle adults. This may provide evidence that beetles may be laying their eggs in fields. The adults feed mainly at night and hide during the day, so scouting in the early morning may be the most productive. 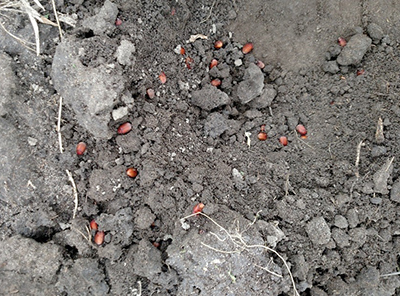 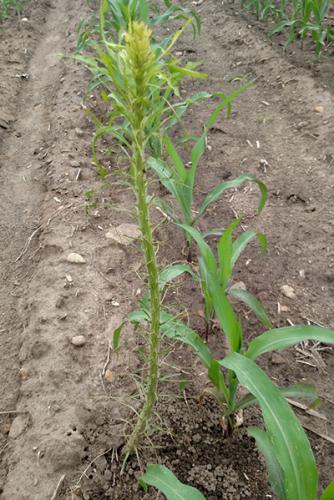 We have heard many producers are thinking about tank-mixing an insecticide to control western bean cutworm with a fungicide to control corn fungal pathogens. This may be a good strategy, depending on what disease is being targeted and the timing.

In Michigan in 2016, ear molds that often took advantage of the easy access afforded by western bean cutworm feeding produced significant losses and dockage at the elevator. These pathogens are best controlled at silking, so if your crop is infested by western bean cutworm but is not approaching R1, you may want to wait and make a separate application. Spraying at VT would have the best chance if you’re seeing a response in controlling pathogens causing leaf diseases.